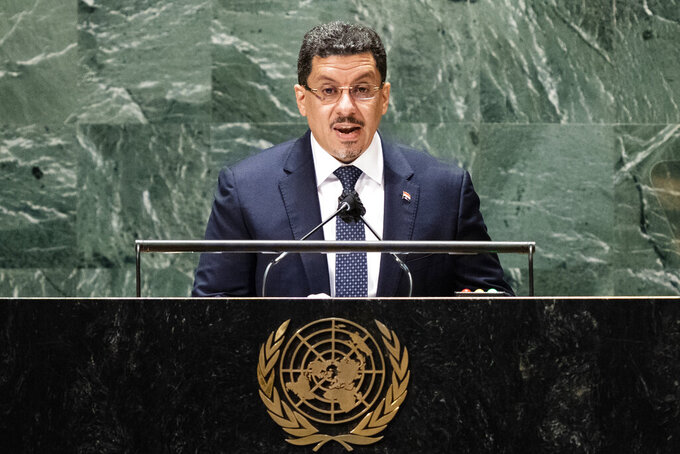 The top diplomat of Yemen's internationally recognized government said Monday his conflict-torn country needs millions more coronavirus vaccines to ensure some of the world's poorest are not left behind.

In a speech to the United Nations General Assembly, Ahmed Awad Bin Mubarak said the roughly 1 million doses Yemen was given are not enough to vaccinate even the most vulnerable portions of its population.

Yemen has a long way to go toward vaccinating the majority of its some 30 million people, most of whom are facing multiple humanitarian crises, including poverty, hunger and poor access to adequately run hospitals.

Yemen’s government has received just roughly 500,000 doses so far this year through the COVAX initiative, and the rest through direct donations from other countries.

“These amounts are still not enough to cover the targeted groups,” Bin Mubarak said. “We hope that the donating countries will contribute to increasing the number of vaccines so that no one is left behind.”

Yemen has been convulsed by civil war since 2014, when the Iranian-backed Houthi rebels took control of the capital, Sanaa, and much of the northern part of the country. That forced President Abed Rabbo Mansour Hadi to flee to the south, then to exile in Saudi Arabia. A U.S.-backed, Saudi-led coalition intervened the following year against the Houthis to try to restore Hadi’s rule.

Yemen’s internationally recognized government has reported around 8,988 cases of COVID-19, including 1,703 deaths, in areas under its controls since the outbreak of the pandemic. The Houthi rebels have reported just four cases, including one fatality. According to the World Health Organization, only roughly 1,000 vaccine doses have been allowed into Houthi territories.

The actual toll across Yemen, though, is believed to be much higher, given the scarcity of testing and its war-ravaged health system.

Bin Mubarak also addressed the country’s stalemated conflict. His government is supported by Saudi Arabia, which has led the coalition that has been at war against the Houthis since 2015.

“We have made many concessions for peace over the past six years, and we accepted all the initiatives and suggestions that aimed to put an end to the coup,” he said, blaming the Iran-backed Houthis for failing to agree to recent initiatives that addressed their key demands, such as allowing the capital’s airport to reopen and facilitating fuel imports. He also repeatedly blamed Iran for its backing of the Houthis.