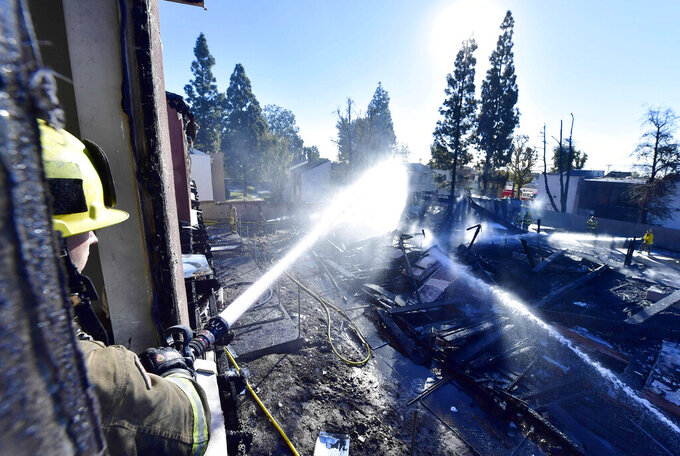 Will Lester, ASSOCIATED PRESS
Firefighters work to mop up a 3-alarm fire at a site under construction in Upland, Calif. Wednesday morning Dec. 1, 2021. Cause of the fire is under investigation which also spread to an occupied apartment structure. (Will Lester/The Orange County Register via AP)

More than 60 firefighters from multiple agencies battled the fire in a construction site near multiple large apartment complexes housing hundreds of residents in the city of Upland, San Bernardino County Fire said in a statement.

Fire reached the attic of an occupied two-story apartment building and the damage displaced 25 residents. The Red Cross was called in to assist those people.

Multiple 911 calls reported the fire at 5:24 a.m. at the construction site near Upland's border with the city of Ontario, about 35 miles east of Los Angeles.

“More than a dozen threatened structures were saved during the intense firefight,” the statement said. “No damage estimates are available but the losses are significant.”

One firefighter received a minor injury.

The cause of the fire remained under investigation.