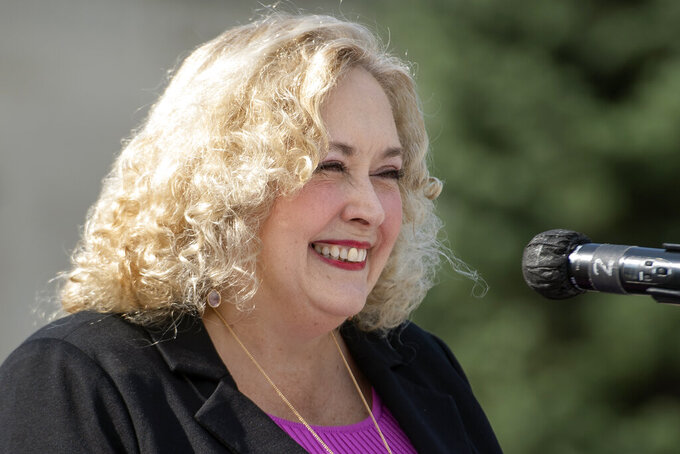 “I love Nebraska, but I know we can do better,” said Blood, who grew up near Hastings. “Our collaborative efforts are much stronger than the voices of a few and we can build a better Nebraska. We do this by inspiring hope and working to transform our divisions.”

Blood first won a seat in the officially nonpartisan Nebraska Legislature in 2016 by defeating a Republican incumbent in a politically divided Sarpy County district. She overcame a GOP challenger in 2020 to hold onto the seat.

But the 60-year-old Blood will face a difficult task getting elected in the GOP-dominated state that former President Donald Trump won by 18 percentage points.

Blood said she hopes Nebraskans will realize they have a lot more in common than they differ on, and she hears from a lot of people who are sick of divisive political rhetoric.

“The only way we’re going to fix this is collaborative by nature. We all have to come to the table,” Blood told The Associated Press.

The field to replace Gov. Pete Ricketts, who will be forced from office by term limits, already includes a long list of Republican contenders. Businessmen Charles Herbster, who also ran for governor in 2014, and Michael Connely have both declared as have State Sen. Brett Lindstrom and University of Nebraska Regent Jim Pillen. And former Gov. Dave Heineman is considering running for his old job.

During her time in the Legislature, Blood has focused heavily on veterans’ issues and election transparency, among other concerns. She has also dug into issues at a problem-plagued ethanol plant in Mead that has raised health concerns among some residents.

Her legislative district includes Offutt Air Force Base. Before joining the Legislature, she served as an at-large member of the Bellevue City Council