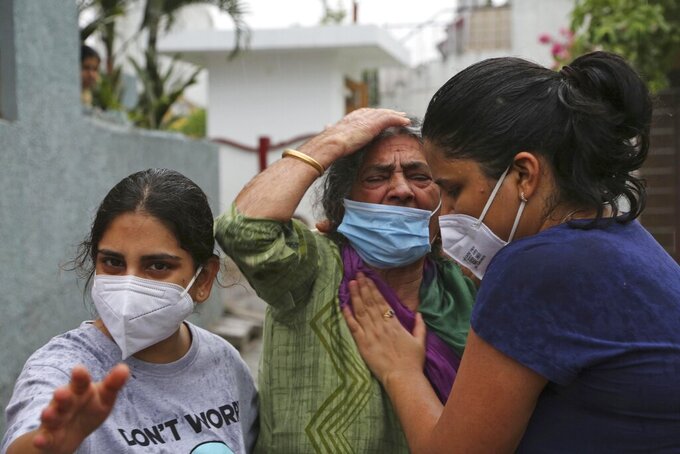 Channi Anand, ASSOCIATED PRESS
The mother of Rakesh Pandita, a politician who was killed late Wednesday, mourns at their residence in Jammu, India, Thursday, June.3, 2021. Assailants fatally shot the politician belonging to India’s ruling party in disputed Kashmir, police said Thursday, blaming separatist rebels for the attack. The unidentified assailants fired at Pandita late Wednesday in the southern town of Tral, where he was visiting a friend, police said. He was declared dead in a hospital. (AP Photo/Channi Anand)

SRINAGAR, India (AP) — Assailants fatally shot a politician belonging to India’s ruling party in disputed Kashmir, and separately, police on Thursday killed a detainee who they said snatched an officer’s rifle and fired at officials inside a police camp.

The unidentified assailants shot Rakesh Pandita late Wednesday in the southern town of Tral, where he was visiting a friend, police said, blaming anti-India rebels for the attack. He was declared dead in a hospital.

Rebels in Indian-controlled Kashmir have been fighting the central government for decades. Suspected militants carried out a string of deadly attacks last year on members of Prime Minister Narendra Modi’s Bharatiya Janata Party in Kashmir. Among those killed was a top BJP politician and his father and brother, who were also party members.

Pandita was also an elected official in a municipal office in Tral. His body was taken to southern Jammu city for a funeral.

“My father was serving the nation,” said Paras Pandita, the politician’s 17-year-old student son at his home in Jammu. “I request the nation that this incident should be probed.”

He had a secured accommodation in the region’s main city of Srinagar and was protected by two police guards, but he went to Tral without them, a police statement said.

Manoj Sinha, New Delhi’s top administrator in Kashmir, and BJP leaders condemned the killing. “Terrorists will never succeed in their nefarious designs, and those responsible for such heinous acts shall be brought to justice,” Sinha said in a tweet.

No rebel group has claimed responsibility for the attack.

Meanwhile, a man was killed in an exchange of gunfire inside a counterinsurgency police camp in Tral town early Thursday, police said, calling him a “terror operative.”

In a statement, police said Mohammed Amin Malik snatched an automatic rifle from an officer during his interrogation and fired at him, leaving the officer critically wounded late Wednesday. He later took position inside the interrogation room, the statement said.

Police said they brought Malik’s mother to the camp and tried to persuade Malik to surrender but he refused and intermittently fired at police throughout the night. The statement said police later engaged him in a gunfight and killed him.

Police arrested the 38-year-old laborer last Sunday and seized a hunting rifle without a license and explosives from him. According to police, Malik was a former militant. He was arrested in 2003 and was released a few years later. His younger brother was killed in a gunfight with Indian troops in 2019.

Mughli, Malik’s mother who uses only one name, told reporters that police tortured her son during his detention. “They beat my son so much that he preferred to die like this,” she told reporters, as she wailed in mourning at her home in Tral.

Kashmir is divided between India and Pakistan and both claim it in its entirety. Most Muslim Kashmiris support the rebel goal that the territory be united either under Pakistani rule or as an independent country.

India says militants are sponsored by Pakistan, but Islamabad denies the charge. Tens of thousands of civilians, rebels and government forces have been killed in the conflict since 1989.

In 2019, Modi’s Hindu nationalist party pushed through with constitutional changes that stripped Kashmir of its semi-autonomy and statehood that gave its residents special rights in land ownership and jobs. The region was also divided into two federally governed territories. Many Kashmiris and critics have likened India’s changes as the beginning of settler colonialism.