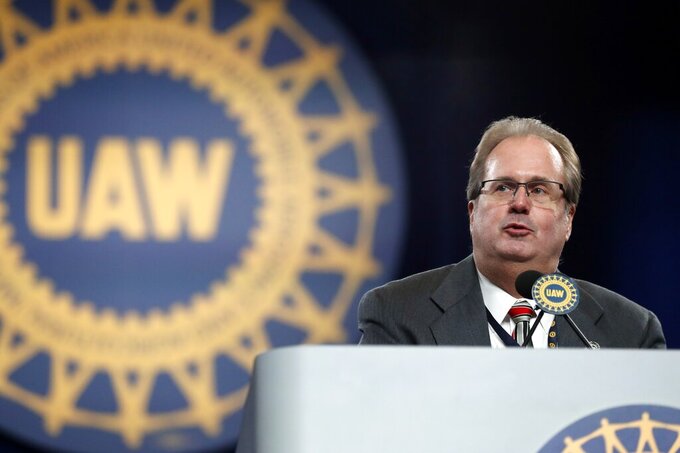 Carlos Osorio, ASSOCIATED PRESS
FILE - In this March 11, 2019 file photo, Gary Jones, president of the United Auto Workers union addresses delegates to the union's bargaining convention in Detroit. Federal prosecutors in Detroit put a herd of UAW officials in prison and they're sharing additional evidence with a court-appointed watchdog who has authority to pursue other misconduct at the union. The investigation led to a dozen convictions at the UAW, including prison terms for two presidents, Jones and Dennis Williams. (AP Photo/Carlos Osorio, File)

DETROIT (AP) — After putting a herd of UAW officials in prison, federal prosecutors said Friday they're sharing additional evidence with a court-appointed watchdog who has authority to pursue other misconduct inside the union.

The independent monitor, Neil Barofsky, can investigate and bring internal disciplinary charges at the United Auto Workers, the government said.

A judge took the unusual step of giving prosecutors permission to share grand jury materials and sealed search warrant applications. The government said the monitor's staff also has met with people who cooperated with agents in the criminal investigation.

The disclosure was made in a statement by the U.S. Attorney's Office in Detroit about continued efforts to clean up the UAW after a dozen convictions exposed corruption at the highest levels of the union and led to prison terms for two presidents, Gary Jones and Dennis Williams.

“The monitor is seeking to gather additional information for purposes of deciding whether any internal disciplinary charges are appropriate against any UAW officials or members,” prosecutors said.

UAW spokesman Brian Rothenberg said the union is cooperating with Barofsky to follow all provisions of the oversight agreement.

Erik Gordon, a business and law professor at the University of Michigan, said it’s clear the government thinks there's more to untangle.

“To reform the UAW to its high purposes, the government needs to banish bad conduct that might not be a provable crime,” he said.

Workers, for example, could complain that they were intimidated into giving money to a charity or cause connected to a union boss, Gordon said.

Daniel Richman, a criminal law professor at Columbia University and a former federal prosecutor, said it turning over evidence to the monitor shows there may be loose ends. “When you have a court monitor, in that context, you’re going to see some real cooperation by the government in trying to clean up a union,” he said.

Barofsky has a wide portfolio in his role as union monitor over six years. He will oversee a November referendum among members coast to coast who will determine whether to change the system for picking leaders.

The UAW, best known for representing workers in the auto industry, has roughly 397,000 active members and more than 580,000 retired members across the U.S.