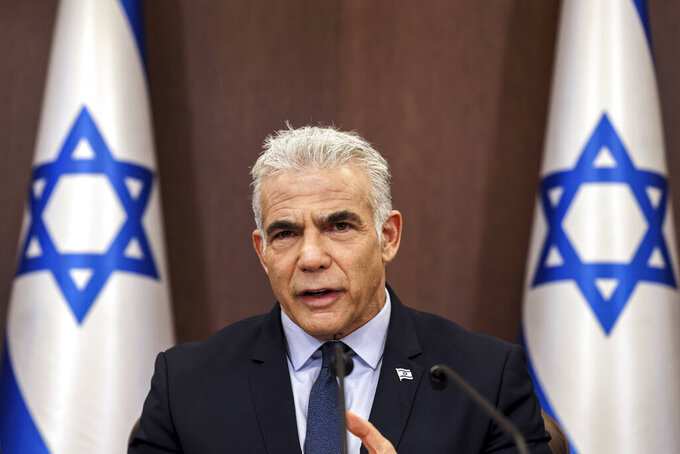 JERUSALEM (AP) — Israel's prime minister on Monday vowed to begin production at a contested Mediterranean natural gas field “as soon as it is possible,” threatening to raise tensions with Lebanon's Hezbollah militant group.

Yair Lapid's announcement in a statement from his office came at a sensitive time in long-running efforts by a U.S. mediator to resolve a dispute over the countries' maritime border. U.S. officials have said they are making progress, but need more time to reach a solution.

Lapid said it is “both possible and necessary” to reach an agreement with Lebanon, which he said would benefit both countries and “strengthen regional stability.”

But he said that production from the Karish gas field is not connected to the negotiations and “will commence without delay, as soon as it is possible.”

Israel set up a gas rig at Karish in June, saying the field is part of its U.N.-recognized exclusive economic zone. Lebanon insists Karish is in disputed waters.

In July, the Israeli military shot down three unarmed Hezbollah drones flying over the Karish field. Hezbollah’s leader issued a warning to Israel over the maritime dispute, saying that “any arm” that reaches to steal Lebanon’s wealth “will be cut off.”

The heavily armed Hezbollah, which fought a monthlong war against Israel in 2006, has repeatedly said in the past that it would use its weapons to protect Lebanon’s economic rights. Still, Hezbollah officials have said they would endorse a deal reached between Lebanon’s government and Israel. Israel considers Hezbollah to be one of its greatest threats.