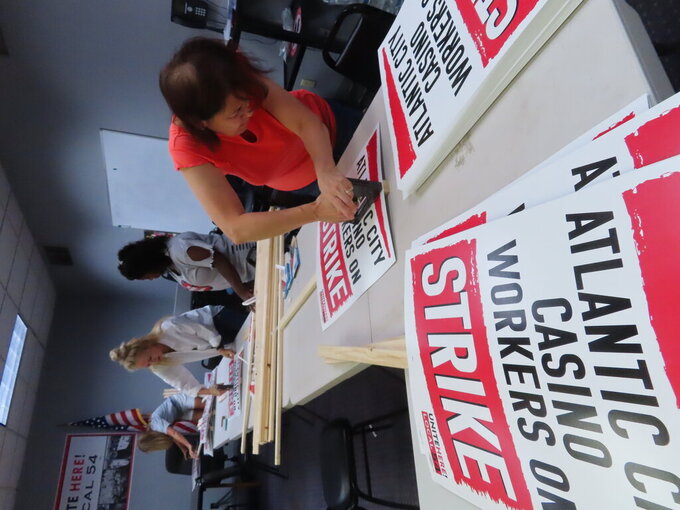 ATLANTIC CITY, N.J. (AP) — As their leaders negotiated with management Tuesday, Atlantic City casino workers prepared for the possibility that those talks would fail and that the union would go out on strike Friday morning.

Local 54 of the Unite Here union was to negotiate with Hard Rock on Tuesday, with talks planned with the owners of three or four others on Wednesday in the hope of reaching new labor agreements and averting a strike during one of the casinos' busiest weekends of the year.

The union has authorized a strike against the Borgata and the three casinos owned by Caesars Entertainment — Caesars, Harrah's and Tropicana — on Friday. It also set a Sunday strike deadline for Hard Rock.

Two other casinos, Bally's and the Ocean Casino Resort, have reached so-called “me-too” agreements in which they pledge to adopt the terms of contracts reached by the bigger properties in town, meaning they will not face a strike.

Tuesday morning, workers at union headquarters began stapling “On Strike” cardboard placards onto wooden sticks inside union headquarters, forming pickets signs that striking workers will carry outside casinos that are the targets of a labor action.

And workers also began signing up for reduced-level strike pay from a fund the union maintains for walkouts. One of them was Ruth Ann Joyce, a bartender at the Harrah's and Hard Rock casinos.

She, like many other workers, said she is falling behind as the casinos emerge from the coronavirus pandemic and try to regain their footing amid worsening inflation and a severe labor shortage.

“Most of the casinos are making money, and we want to be a part of that,” she said while stapling sign after sign, wearing a hoodie commemorating the union's last strike in 2016 against the Trump Taj Mahal.

That strike, over health care and pension benefits, forced the casino to close. It reopened in 2018 as the Hard Rock under new ownership.

Joyce predicted the casinos would have a hard time providing basic services if the union went on strike this weekend.

“I don't believe in this day and age there are any workers out there to bring in,” she said. “We need to pay well to retain the workers we already have.”

The union has said it is seeking a “significant” salary increase as part of its next contract, but has not publicly revealed the amount it wants.

In previous contracts, union leaders say, they focused more on maintaining health care benefits at the expense of salary gains. But in the current climate, they say, workers need higher pay to keep up with the rising cost of gasoline, food, rent and other expenses.

The union is bargaining mainly with Caesars Entertainment and MGM Resorts International, which owns the Borgata, the city's top performing company.

The next few days should provide more insight into whether a strike appears likely against some or all of the casinos that have not yet reached agreements with the union.