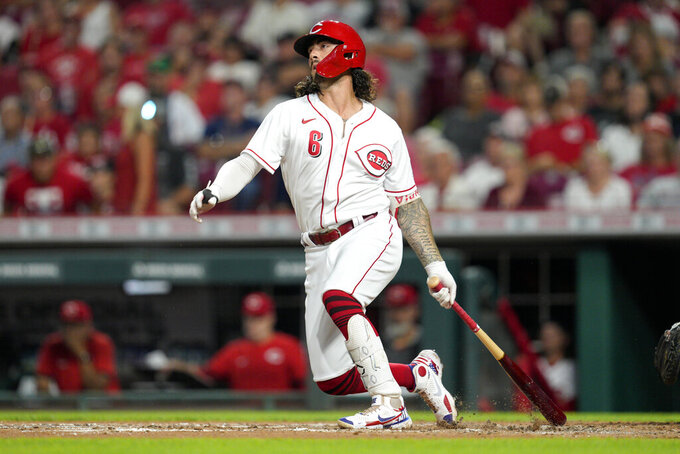 CINCINNATI (AP) — Jonathan India and Kyle Farmer each drove in two runs, Donovan Solano added a solo homer and the Cincinnati Reds snapped their eight-game home losing streak against the Boston Red Sox with a 5-1 victory on Wednesday night.

“The bloop hits are good hitting sometimes,” manager David Bell said. “Just getting the bat on the ball can be enough.”

Farmer snapped an 0-for-18 slide with the hit.

“I've been struggling for a few games, hitting the ball right at people,” Farmer said. “Sometimes, it just falls. Luckily, I got some RBIs out of it. I'm thankful for the shift and no one being there. It's baseball. Everyone has gone through it. It can turn quickly. I feed off Jon. It seems when he's going bad, I am, and when he's going good, so am I.”

Solano provided an insurance run with a lined shot to deep right-center field in the eighth.

Chase Anderson (2-3) gave up three hits and one run with no walks and four strikeouts while earning his second straight win in his fifth start of the season. Anderson, who’s with his third organization this season, also hit a batter.

“It is a step in the right direction,” Anderson said. “When I first got here, my goal was to make each outing a little better and build the pitch count. I didn't walk anybody, and that's huge. I didn't feel that great, body-wise. The cutter was really good."

Fernando Cruz, Reiver Sanmartin and Derek Law combined for 3 1/3 innings of three-hit, shutout relief before Alexis Díaz got the final two outs, starting a game-ending double play for his eighth save.

The Reds (73-75) had lost four of their last five and 10 of 12 while settling into fourth place in the NL Central.

Connor Seabold (0-3) threw four wild pitches in a career-high five innings while allowing six hits and four runs with one walk and four strikeouts. Seabold also hit a batter in his first major league appearance since July 8. The Red Sox recalled him from Triple-A Worcester on Wednesday.

“Good fastball,” manager Alex Cora said. "Good off-speed pitches. The slider was the one I remember from earlier in the season. It was just bad luck. A ground ball gets through. They score a couple of runs on a bloop single. It was one of those nights — a lot of weak contact that found green. It was a good first step.

The Reds took a 1-0 lead in the third on Fairchild’s leadoff single to right and a two-out wild pitch that India cashed in with an RBI single to left.

The Red Sox tied it in the fourth. Rafael Devers led off with a chopper up the third base line that went for a hit against the infield shift. Devers went to third on Xander Bogaerts’s single to left, setting up Alex Verdugo’s sacrifice fly.

Red Sox OF Tommy Pham went a combined 2-for-8 with a double and four strikeouts in his first two games against the Reds since they traded him in a deadline deal. Pham struck out three times on Wednesday, his 14th three-strikeout game of the season.

Reds C Chuckie Robinson threw out Xander Bogaerts trying to steal second, snapping at 11 the streak of consecutive stolen base attempts against the Reds, dating back to Sept. 9 at Milwaukee.

Joey Votto wore a Roberto Clemente Pirates jersey during a pregame ceremony honoring him as the Reds' nominee for the Roberto Clemente Award. Votto is out for the season after undergoing surgery to repair injuries to his left shoulder and bicep.

Red Sox: Former Reds OF Tommy Pham was hit on the left elbow with the third pitch of the game. That boosted the Reds' single-season major league record for hit batters to an even 100. Pham stayed in the game.

Reds: OF Nick Senzel was placed on the 10-day injured list with a fractured bone in his left foot suffered when he banged into the wall chasing J.D. Martinez’s triple on Tuesday. … SS Kyle Farmer stayed in the game after being hit in the back with a pitch in the first inning.

Red Sox: RHP Michael Wacha (11-1, 2.61) is 8-0 over his last 12 starts since losing to the Reds on May 31 in Boston. The winning streak matches the longest of his career. He allowed two hits over seven shutout innings in his last start against the Yankees on Aug. 14.

Reds: The starting pitcher for Thursday’s opener of a four-game series against the Brewers had yet to be announced.