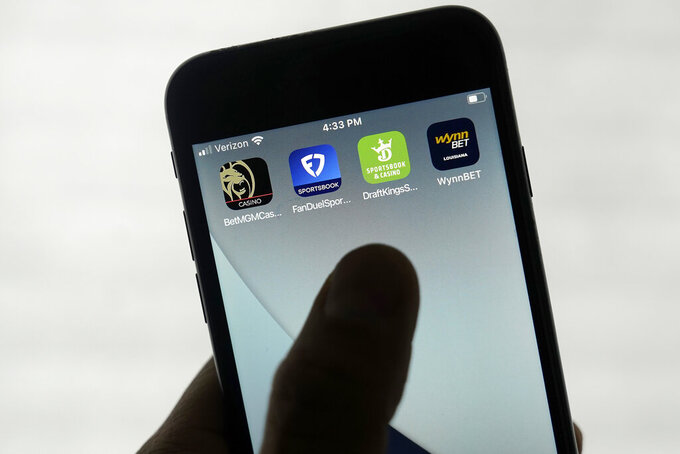 Jeff Chiu, ASSOCIATED PRESS
FanDuel, DraftKings and other online gambling apps are displayed on a phone in San Francisco, Monday, Sept. 26, 2022. The campaign that could bring legalized sports betting to California has become the most expensive ballot initiative fight in state history. Two rival proposals are pitting wealthy Native American tribes against FanDuel, DraftKings and other online gambling companies, in a contest over what could become the nation's most lucrative marketplace. (AP Photo/Jeff Chiu)

About $460 million was raised in competing efforts to expand gambling and try to capture a share of a potential billion dollar market in the nation’s most populous state. Final contributions are still being tallied.

But voters did not want a piece of that action.

With more than 4.6 million votes counted, a measure largely supported by gaming companies that would have allowed adults to wager on mobile devices and online had only 16% support. A proposition that would have legalized sports gambling at tribal casinos and horse tracks had less than 30% support.

The money raised and spent more than doubled the record amount spent in 2020 by Uber, Lyft and other app-based ride-hailing and delivery services to prevent drivers from becoming employees eligible for benefits and job protection.

More than 30 other states allow sports betting, but gambling in California is currently limited to Native American casinos, horse tracks, card rooms and the state lottery.

The race was marked by a blast of advertising that touted benefits supporters of each measure claimed would come with approval. Each was countered by robust campaigns that warned of the dangers they posed.

Tribes who opposed Proposition 27, the mobile and online gambling measure, said voters didn't want a massive expansion of gambling, they thought it would be easier to become addicted and feared children would place bets on devices.

“Our internal polling has been clear and consistent for years: California voters do not support online sports betting,” said Anthony Roberts, tribal chairman of the Yocha Dehe Wintun Nation. “Voters have real and significant concerns about turning every cellphone, laptop and tablet into a gambling device, the resulting addiction and exposure to children.”

Opponents of Proposition 26, which would have allowed casinos and the state’s four horse tracks to offer sports betting in person, said voters did not want to enrich wealthy tribes who would get a virtual monopoly on gambling and also be able to offer roulette and dice games at their gaming operations.

“Prop. 26 was not just a sports betting measure but a massive expansion of gambling by five wealthy tribes that included a poison pill aimed at taking market share away from highly regulated cardrooms that provide millions of dollars in tax revenue to communities and tens of thousands of jobs," the No on Proposition 26 Campaign said in a statement.

That group was funded largely by cardrooms that stood the most to lose if the measure passed. They said the so-called “poison pill” would allow tribes to sue competitors such as cardrooms.

The casino and race track measure was bankrolled by a coalition of tribes who said a 10% tax would have helped pay for enforcement of gambling laws and programs to help gambling addicts.

The online sports gambling initiative was backed by DraftKings, BetMGM, FanDuel — the latter is the official odds provider for The Associated Press — as well as other national sports betting operators and a few tribes.

They promised to funnel tax revenues to help the homeless, the mentally ill and and poorer tribes that haven't been enriched by casinos.

However, that revenue could be offset if people spend money on sports gambling instead of shopping or buying lottery tickets.

Democratic Gov. Gavin Newsom, who easily won reelection, didn't take a position on either proposal but said Proposition 27 was “not a homeless initiative.”

This story has been updated to correct the amount raised in competing efforts to expand gambling. It was about $460 million, not $600 million, with final contributions still being tallied.