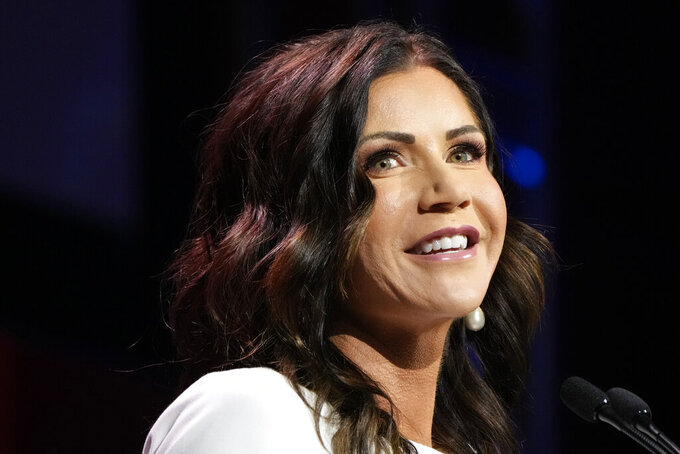 The Legislature's Government Operations and Audit Committee, which is controlled by Republicans, sent letters asking Secretary of Labor and Regulation Marcia Hultman and the former director of the state's Appraiser Certification Program, Sherry Bren, to show up at a meeting next week. Although it isn't clear what will be asked of the women, the requests for them to appear at the meeting show that lawmakers want more answers from the Republican governor.

Bren and Hultman were central to the episode that has raised concerns from ethics experts. They attended the meeting in the governor's office in July 2020, just days after Bren's agency moved to deny Peters a certification to become a residential appraiser. Peters received her license four months after the meeting. And days after she received it, Hultman allegedly pressured Bren to retire. Bren eventually left her job this year after the state paid her $200,000 to withdraw an age discrimination complaint.

Noem has dismissed concerns about the episode by saying she never requested special treatment for her daughter and casting her actions as an effort to “cut the red tape” to address a shortage of appraisers certified by the state. She also has said the initial report on the meeting from The Associated Press was a political attack.

Republican lawmakers on the committee said they would start with questions about why there was a shortage of appraisers under Bren's leadership.

“Secretary Hultman is prepared to talk about how South Dakota has made positive changes to the Appraiser Certification Program,” said Dawn Dovre, a spokeswoman for the Department of Labor and Regulation.

However, Republicans acknowledged that the committee could also hone in on whether Noem inappropriately interfered in the agency while her daughter was applying for a license.

“Anything is fair game, especially when there is public testimony,” said state Rep. Randy Gross, the committee's vice-chair. “There is no script for the meeting.”

Democratic state Rep. Linda Duba said she wanted to focus on why the governor involved her daughter in the meeting. She planned to press for the committee to spend more time delving into the issue.

“I don’t know what is going to come of this, but we can’t just give it one hour on the agenda and then walk away,” she said.

Both Bren and Noem's administration have limited their comments about why she was pressured to retire, in part because the settlement agreement bars them from disparaging each other.

Noem, 49, has generated speculation that she might run for president in 2024 because she formed a federal political action committee, has been assisting campaigns across the country and has attended many of the same events as other potential GOP hopefuls.

The audit committee has scheduled the matter of the July 2020 meeting as its first item of business on Thursday next week. It also requested the presence of the president of the state's appraiser association, who has been critical of Noem's handling of the agency and called for a thorough investigation. In addition, lawmakers want to hear from the Office of Risk Management, which negotiated the settlement with Bren.