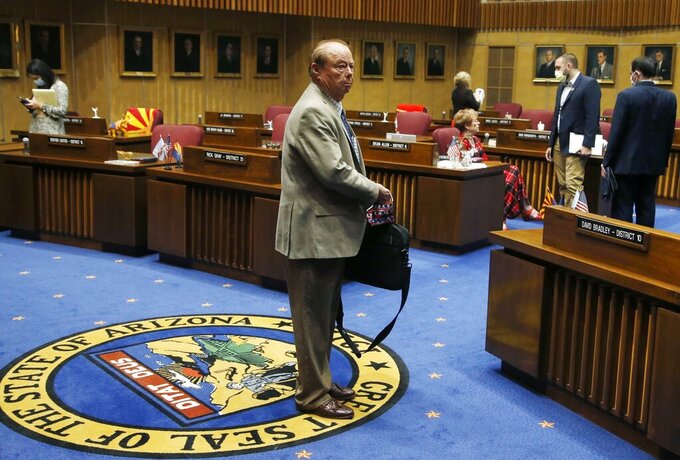 Pratt was a farmer and rancher before forming a swimming pool construction business in 1986, according to his biography in a legislative guide published by the parent company of the Arizona Capitol Times.

On Christmas Day in 2010, Pratt was tied up and beaten at his business, found hours later by his worried wife, Janice Pratt. The assailant stole his Rolex watch and vehicle, and Pratt was hospitalized.

Pratt had served in the Legislature since 2009, first in the House, then in the Senate before returning to the House at the beginning of the year. He was a quiet legislator who rarely spoke on the House and Senate floor.

“Although he was not vocal, when he spoke, his words carried weight,” said Rep. Reginald Bolding, the top Democrat in the House.

Pratt was among a handful of Republican legislators who joined all Democrats and Republican Gov. Jan Brewer in 2013 in a coalition to expand Medicaid, a key part of then-President Barack Obama's health care law. The expansion was vehemently opposed by the GOP House and Senate leaders, who blocked votes in the Legislature for weeks until Pratt and other expansion supporters forced them to cave.

More recently, he missed many legislative days this year as he battled an illness.

“He was a trailblazer not just in Pinal County politics but also in life,” said Sen. T.J. Shope, a Republican who represents the same district as Pratt. “While most knew him to be a quiet type who played his cards close to the vest, I knew him as somebody of deep conviction and a firm belief in right & wrong.”

Pratt's 8th Legislative District includes parts of Pinal and Gila counties. Republican precinct committeemen will choose three candidates to replace him, and county supervisors will select a winner, who must be a Republican. The Legislature is not scheduled to be in session until January.

Gov. Doug Ducey has ordered flags at all state buildings be lowered to half-staff from sunrise to sunset Wednesday in honor of Pratt.