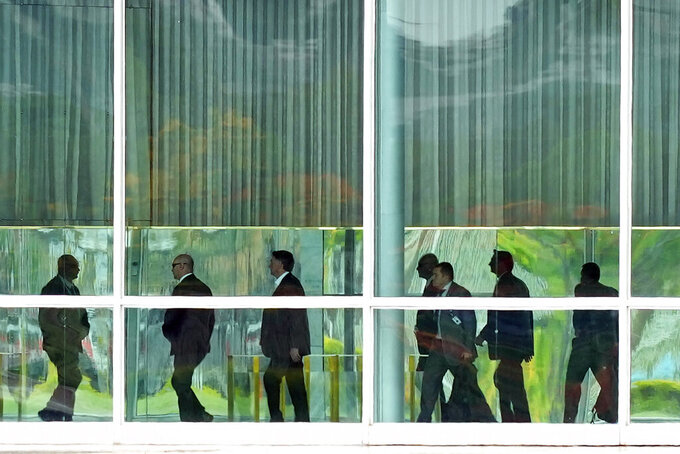 RIO DE JANEIRO (AP) — The defense ministry released a report Wednesday highlighting flaws in Brazil's electoral systems and proposing improvements, but there was nothing to substantiate claims of fraud from some of President Jair Bolsonaro’s supporters protesting his Oct. 30 defeat.

It was the first comment by the military on the runoff election, which has drawn protests nationwide even as the transition has begun for President-elect Luiz Inácio Lula da Silva's inauguration Jan. 1. Thousands have been gathering outside military installations in Rio de Janeiro, Sao Paulo, Brasilia and other cities calling for intervention by the armed forces to keep Bolsonaro in office.

When the defense ministry announced this week that it would present its report on the election, some Bolsonaro supporters rejoiced, anticipating the imminent revelation of a smoking gun. That didn't happen.

“There is nothing astonishing in the document,” Diego Aranha, an associate professor of systems security at Aarhus University in Denmark, who has been a member of the Brazilian electoral authority’s public security tests, told The Associated Press. “The limitations found are the same ones analysts have been complaining about for decades ... but that doesn't point to evidence of irregularity."

Defense Minister Paulo Nogueira wrote that “it is not possible to say" with certainty the computerzed vote tabulation system hasn't been infilitrated by malicious code, but the 65-page report does not cite any abnormalities in the vote count. Based on the possible risk, however, the report suggests creating a commission comprised of members of civil society and auditing entities to further investigate the functioning of the electronic voting machines.

Bolsonaro, whose less than two-point loss was the narrowest margin since Brazil’s 1985 return to democracy, hasn't specifically cried foul since the election.

Still, his continued refusal to concede defeat or congratulate his opponent left ample room for supporters to draw their own conclusions. And that followed more than a year of Bolsonaro repeatedly claiming Brazil's electronic voting system is prone to fraud, without ever presenting any evidence — even when ordered to do so by the electoral authority.

In the months leading up to the vote, as polls showed him trailing da Silva, Bolsonaro pushed for the military to take on an expanded role in the electoral process. The election authority, in a gesture apparently aimed at placating the president, allowed for armed forces' unprecedented participation. The report presented Wednesday was signed by the defense minister and representatives from the army, navy and air force.

The electoral authority said in a statement it “received with satisfaction the defense ministry's final report that, like all other oversight bodies, did not point to the existence of any fraud or inconsistency in the electronic voting machines and 2022 electoral process.”

Bolsonaro didn't immediately comment on the report, nor did the presidential palace respond to an AP email. His party's leader said Tuesday the president would question election results only if the report provided “real” evidence.

Da Silva, speaking Wednesday in the capital, Brasilia, on his first visit since the election, told reporters that the vote was clean and Brazil's electronic voting machine system is an achievement.

“No one will believe coup-mongering discourse from someone who lost the elections,” da Silva said. “We know that the institutions were attacked by some government authorities.”

Brazil began using an electronic voting system in 1996. Election security experts consider such systems less secure than hand-marked paper ballots, because they leave no auditable paper trail. Brazil’s system is, however, closely scrutinized and domestic authorities and international observers have never found evidence of it being exploited to commit fraud. Outside security audits have been done to prevent the system’s software from being surreptitiously altered. In addition, prior to election day, tests are conducted to assure no tampering has occurred.

The electoral authority said in its statement Wednesday that it would analyze the defense ministry’s suggestions. Aranha, the system security professor, said the military's suggestions to address flaws aren’t specific and would actually make an audit even more difficult.

This year, the armed forces also conducted a partial audit, comparing hundreds of voting stations' results to the official tally. The idea was first floated by Bolsonaro, who in May said they “will not perform the role of just rubber stamping the electoral process, or taking part as spectators.”

The federal government's accounts watchdog carried out a partial audit similar to that of the military, tallying votes in 604 voting machines across Brazil. It found no discrepancies. Likewise, Brazil's Bar Association said in a report Tuesday that it had found nothing that pointed to suspicion of irregularities.

“There are important lessons from all this," said Paulo Calmon, a political science professor at the University of Brasilia, who continued: "primarily, the idea to formally involve the armed forces in electoral processes is an error that should never be repeated.”