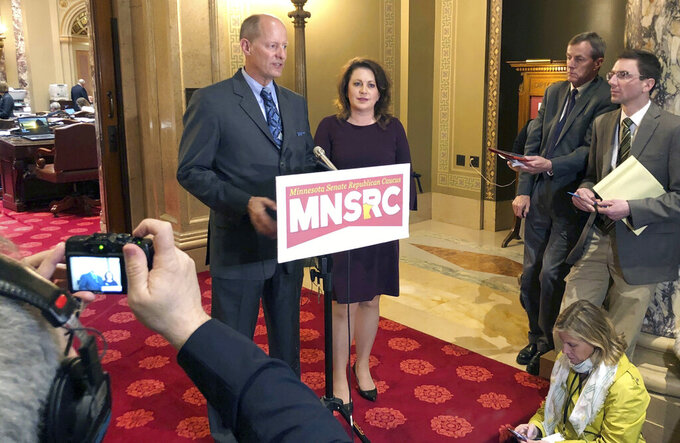 Steve Karnowski, ASSOCIATED PRESS
In this May 2, 2019 photo, Minnesota Senate Majority Leader Paul Gazelka, left, stands next Deputy Majority Leader Michelle Benson as he speaks to reporters at the state Capitol in St. Paul. Benson has launched her campaign for Minnesota governor, saying she’ll fight efforts to close schools and businesses or defund the police. She calls herself “an unwavering conservative fighter” in a statement posted on her campaign website. She also posted a YouTube video declaring her candidacy and plans a formal announcement at a machining company in Blaine on Wednesday, Sept. 1, 2021. Meanwhile, GOP Sen. Paul Gazelka, of East Gull Lake, is stepping down as Senate majority leader. (AP Photo/Steve Karnowski, file)

“The left is defunding the police, crime rates are skyrocketing. The governor shut down our schools, and test scores are falling like a rock. He crippled main street businesses," Benson, of Ham Lake, told supporters outside a precision machining company in Blaine.

Benson spoke shortly after GOP Sen. Paul Gazelka, of East Gull Lake, announced that he's resigning as Senate majority leader, a step he had said he'd take if he was going to run for governor. Gazelka said in an interview that he's leaning toward running but will hold off on announcing his decision until sometime after the State Fair, where he's been talking with voters to learn what's on their minds. He said he'd been drafting his resignation letter for a few days, but gave Benson a head-up call Tuesday night after learning she was about to announce.

Benson chairs the Senate Health and Human Services committee, which she called “the toughest budget committee in the Minnesota Senate.” She has been one of the leading Republican senators on pandemic and other health issues, and on addressing fraud and other problems within the state's human services programs.

The senator told reporters that Walz and his administration should have taken a county-by county approach to pandemic restrictions such as school and business closures instead of a statewide approach. She also said she opposes vaccine mandates.

“Our schools should have been open last fall. Elementary students should have been safely in school last year. That would have fundamentally changed this pandemic for families,” Benson said. She wouldn't rule out a move proposed last week by GOP Sen. Jim Abeler, of Anoka, for the Senate to use its power to fire Walz's health commissioner, Jan Malcolm.

Walz told the Star Tribune last week that he's against defunding the police and opposes a charter amendment that will be on the Minneapolis city ballot this fall to replace the city's police force with a new public safety department. The governor came sharp GOP criticism last summer for the state's response to the unrest that followed the death of George Floyd.

Both Benson and Gazelka will have to work to catch up with former state senator Scott Jensen, who's been running hard since March to try to lock up Republican caucus and convention delegates for the 2022 gubernatorial campaign. Jensen, a family physician from Chaska, has been running on a platform of vaccine skepticism and opposition to the state's response to the pandemic.

Benson told reporters her pitch to delegates is “I can get the most votes, and I can win.” She highlighted her small-town roots, growing up on a farm in Murdock in west-central Minnesota, and said people in greater Minnesota feel “very differently” from people in the Minneapolis-St. Paul area about the restrictions Walz imposed earlier in the pandemic.

But Benson initially appeared to hedge on whether she'll abide by the party's endorsement. She noted the recent turmoil within the Minnesota GOP, which is leaderless after its former chairwoman, Jennifer Carnahan, resigned under fire. Benson said the party needs to be able to deliver a campaign with a strong ground game that can beat Walz. She later issued a statement clarifying that she will honor the endorsement, an important consideration for many party activists.

Gazeka straightforwardly said he would honor the party's endorsement and wouldn't run in the GOP primary if he doesn't get it. He also said he won't seek another Senate term regardless of whether he runs for governor.

Walz has not announced yet whether he'll seek a second term. Other Republicans who have already entered the race include Dr. Neil Shah, Lexington Mayor Mike Murphy and Kasson businessman Mike Marti.