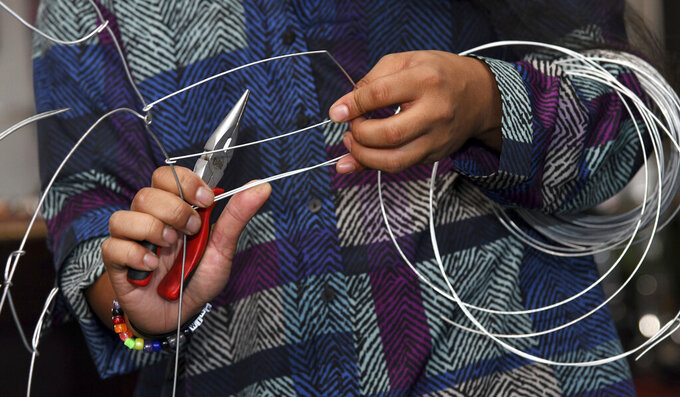 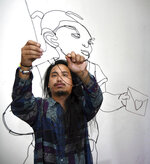 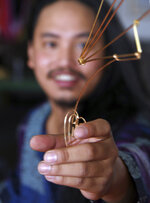 BALTIMORE (AP) — The street artist known as Reed Bmore is accustomed to seeing his pieces fly high over the heads of the public as the ingenious wire sculptures dangle — cheekily, if illicitly — from light fixture and traffic signal power cables.

But at the age of 29, the artist who occasionally has been described as “the Bansky of Baltimore” and his work are about to find firmer footing.

“Cat out of the bag!!” Bmore (birth name Jon Struse) recently wrote ebulliently on Instagram. “WE WON!!!!! I finally get create a permanent sculpture the city can’t take down this time!”

“We” refers to Bmore’s collaboration with the metal artist Nick Ireys. The two have snagged a commission to create a 25-foot tall metal sculpture known as “Food Play” that will be installed in Lexington Market’s new plaza in September 2022.

In the past 12 months alone, Bmore, a native of the Philippines and a 2014 graduate from the Maryland Institute College of Art, has received a commission from the Philadelphia 76ers basketball team. (He created a giant version of the team logo leading up to the team’s ultimately unsuccessful playoff run.) An artwork that Bmore donated to the city of Denver commemorating a victim of police brutality went viral in Colorado. And he has been notified that one of his works may be highlighted at some unspecified future date on a cable television show. (Bmore says he’s not allowed to reveal more details.)

As he puts it: “I’m trying to broaden the sense of what community is.”

At first glance, the artists’ design for Lexington Market appears not much different from other examples of public art in food courts, mixing together different items of food: a fish head, crab claw, apple, two bananas and a head of broccoli. But look closer, and a subtle message emerges: the sculpture moves in one line from violet to red to gold and green.

He is perhaps best known in Baltimore for his 2019 sculpture depicting a hogtied Healthy Holly which swayed — very briefly — across from City Hall when Catherine Pugh was still mayor. (Note to Baltimoreans with short memories: Holly was the fictitious main character in a book series written by Pugh that ended her political career and culminated in a three-year sentence in federal prison.)

Last fall, his “Memorial for Elijah McClain” generated buzz in Denver. McClain died Aug. 30, 2019, six days after a violent encounter with police. The sculpture portrayed the former massage therapist playing a violin while a cat rubbed up against him. The piece went up during the 2020 Thanksgiving weekend and hung within view of the Colorado state capital.

The Denver Post wrote an article about the response the artwork was generating on social media.

“Moved to tears by this piece by Reed Bmore,” the Denver artist Kali Fajardo-Anstine wrote on Twitter. “Elijan McClain above Denver with his violin and his kitty. Rest, beautiful soul.”

Bmore’s artwork is usually tender and often funny. If his creations tend to generate more smiles than scowls, it may be because even his most overtly political pieces seldom come across as angry or embittered.

For instance, one work that can be viewed on the artist’s Instagram account depicts a young boy hanging far above the ground and clinging to a power cord for dear life. The word “hustle” is written on his shirt, and by his side are a squirt bottle and windshield scraper, the tools of the Squeegee Kids’ trade.

With one look, viewers are reminded how tenuous existence can be for these corner kids.

Other artworks are more light-hearted.

In a 2017 piece, the character of the Little Prince, immortalized in the 1943 French children’s book by Antoine de Saint-Exupéry, dangled from a friendly star. In another, a girl was carried aloft by a giant balloon. Still others of Bmore’s artworks are different treatments of the word “Love.”

The artist says his gentlest artworks are as political as those with more overt messages.

“Whenever someone goes out into public and displays a piece of art, they are making a political statement,” he said. “I just want to create things that are meaningful.”