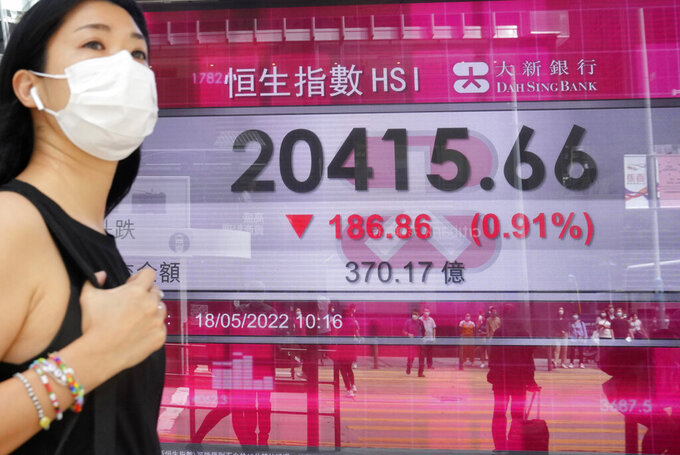 The Fed will “have to consider moving more aggressively” if inflation that is running at a four-decade high fails to ease after earlier rate hikes, chair Jerome Powell said at a Wall Street Journal conference.

Expectations of rate hikes “ticked higher” due to Powell's comments, but “markets are shrugging it off and are in need of a breather” after a sell-off, Yeap Jun Rong of IG said in a report.

The Nikkei 225 in Tokyo gained 0.7% after the government reported economic output shrank 0.2% in the first three months of 2022. That was stronger than expectations.

Big tech stocks led the rally. Apple and Microsoft were among the biggest winners.

Small-company stocks rose more than the rest of the market, a signal that investors are feeling bullish about the economy. Treasury yields rose.

Consumers are providing critical support to the economy despite higher costs for gas, food and rent. The economy contracted in the first three months of the year, but consumer and business spending still increased at a healthy pace.

The Fed and other central banks are raising interest rates that have been near zero during the coronavirus pandemic or say they plan to in order to cool inflation.

Supply chain problems have prompted businesses to raise prices on everything from food to clothing as demand rebounds after the pandemic.

Oil and gas prices have been pushed up by Russia's war on Ukraine, which fueled fears Russian supplies might be disrupted.