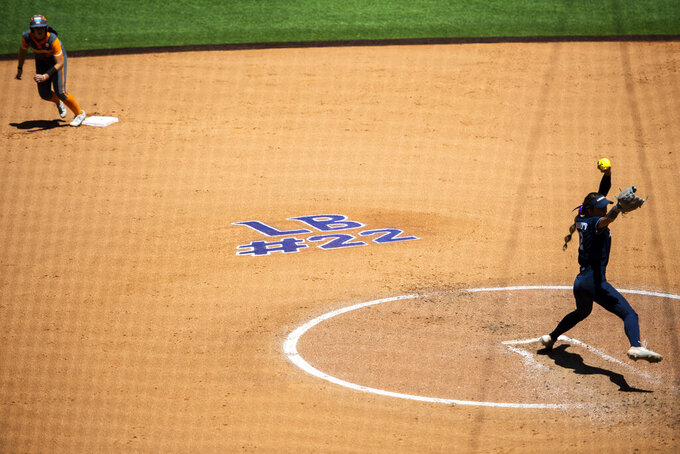 Kendall Warner, ASSOCIATED PRESS
FILE - "LB #22," in honor of James Madison softball catcher Lauren Bernett, is written on the infield behind Liberty pitcher Emily Kirby, right, during an NCAA college softball game against Tennessee at Liberty Softball Stadium in Lynchburg, Va., April 27, 2022. There has been a lot of talk about the mental health struggles that many young athletes face, the pressures and vulnerabilities that can seem overwhelming — especially to those who feel compelled to shield their pain from the outside world. (Kendall Warner/The News & Advance via AP, File)

MADISON, Wis. (AP) — Wisconsin soccer player Emma Jaskaniec remembers feeling hesitant about getting help before her freshman season when a psychologist approached the team to offer assistance to anyone in need.

“In my eyes, at least at that point in time, I felt like if I had to reach out to him, it had to be like I was having really dark thoughts,” Jaskaniec said. “It wasn’t really normalized and it wasn’t like, ‘Oh, if you’re feeling anxious you can reach out to him.’ I don’t think they meant for it to be like that, but I think in my eyes and a lot of other athletes’ eyes, it was like it had to be such a serious issue.”

Jaskaniec said things have changed on campus over the last year — mental health is a more common topic in the locker room. It was also the topic of discussion Tuesday night for a panel of current and former Wisconsin athletes.

The event came three weeks after Wisconsin cross country and track runner Sarah Shulze’s death, though it was scheduled well beforehand. Shulze’s family announced last month that the 21-year-old took her own life on April 13.

“Balancing athletics, academics and the demands of everyday life overwhelmed her in a single, desperate moment,” Shulze’s family said in a statement. “Above all other things, Sarah was a power for good in the world.”

Shulze is one of three Division I athletes who took their own lives in the past two months. Stanford soccer player Katie Meyer, the goalkeeper on the Cardinal’s 2019 national championship team, died March 1. James Madison softball player Lauren Bernett, who helped the team get to the Women's College World Series last year, died April 25.

All proceeds from Tuesday’s event went to the Sarah Shulze Foundation, which her family established to support women’s rights, student-athletes and mental health.

UNCUT Madison, the Wisconsin athlete-led nonprofit that organized Tuesday’s discussion, released a statement after Shulze’s death encouraging “institutions, athletic departments, policymakers and people across the country to invest in resources that support student-athletes as they grapple with the pressures of playing a sport while being a full-time student.”

Montee Ball, a 2011 Heisman Trophy finalist, discussed his struggles with alcohol, which ended his NFL career after two seasons with the Denver Broncos. Both Borland and Ball are now mental health advocates.

Jaskaniec said the pandemic caused additional stresses for college athletes, and that she has benefited from meditation.

Ball and Borland said they appreciated how current athletes are more open in talking about mental-health struggles than in the past.

“Kevin Love, I would say, kind of kicked it off,” Ball said of the Cleveland NBA player who's been open about panic attacks and mental health struggles. “Obviously, we have a lot of other athletes doing the exact same thing. I think if you are someone who has that stage, given the abilities to create a stage to talk about something, this is a topic that you need to speak of. I’m starting to see the snowball effect in that way.”

Kris Eiring, a former Wisconsin sprinter who now works as a sports psychologist, encouraged athletes to check on one another and go beyond the surface.

“All of us are so busy in our own worlds, we forget about our teammates," Eiring said. "When you say, ‘How are you doing?’ when you walk by and they say, ‘Great,’ you really don’t know. Maybe with the recent suicides, it can us a pause for a moment, just to check in just a tad deeper. ‘Are you really doing OK?’ That would make a difference.

Jaskaniec said she sees those changes taking place: “I was talking with one of my teammates earlier today. She’s saying that we feel like when we ask somebody if we’re OK, especially with what has been happening, people are actually starting to open up more about how they’re actually feeling, which I think is one of the biggest steps going into the next direction.

"For things to get better, you actually have to seek out help.”