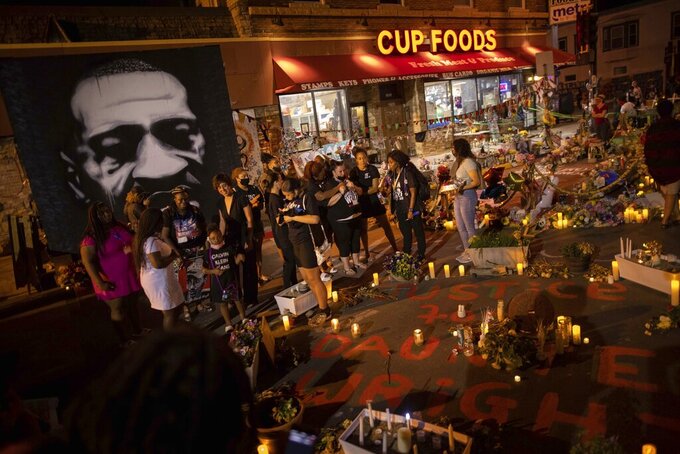 Christian Monterrosa, ASSOCIATED PRESS
FILE - The family of Daunte Wright gathers on the one-year anniversary of George Floyd's death, May 25, 2021, in Minneapolis. A candlelight vigil to honor Floyd's memory at the intersection where he died was among the remembrances scheduled for Wednesday's second anniversary of the Black man's killing at the hands of Minneapolis police officers. (AP Photo/Christian Monterrosa, File)

MINNEAPOLIS (AP) — The Minnesota Supreme Court has ruled that the mayor of Minneapolis hasn't met a legal duty to hire more police officers or demonstrate why he hasn't done so.

In a Monday ruling, Chief Justice Lorie Gildea said Mayor Jacob Frey has a “clear legal duty” under the city’s charter to staff the department with at least 731 sworn officers, a number based on the population of Minneapolis.

Interim City Attorney Peter Ginder said the city has about 300 fewer officers than it did before George Floyd was killed by police in May 2020. The city's former police chief had attributed the departures to retirements and officers who filed disability claims, some citing symptoms of post-traumatic stress disorder linked to the protests over Floyd’s killing.

Ginder calls it “an unprecedented loss of personnel that is not easily corrected,” but noted that the city has provided funding for additional recruit classes and hiring bonuses.

The ruling sends the case back to district court in Hennepin County.

Eight residents concerned about crime sought the court order to force the city to hire more police as required by the charter. The state Supreme Court heard arguments earlier this month from them that the current staffing is about 120 officers less than they believed was required.

Minneapolis attorneys argued that the charter requirement relates only to funding, but the mayor still may determine how the money may be used within the department.

The killing of Floyd, who was Black, led to a reckoning over police brutality and discrimination involving people of color.

Derek Chauvin, a white police officer who pinned Floyd’s neck to the pavement with his knee, was convicted last year of murder. Another former officer pleaded guilty in May to a state charge of aiding and abetting second-degree manslaughter. Two other two former Minneapolis police officers are awaiting trial on state charges that is scheduled for October.