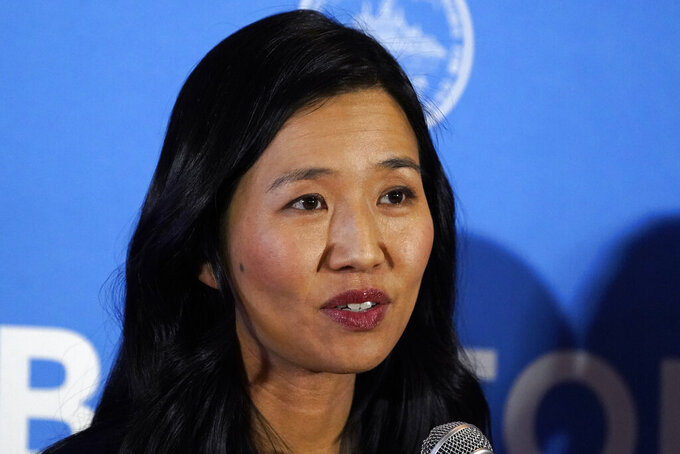 Charles Krupa, ASSOCIATED PRESS
Boston Mayor Michelle Wu addresses a gathering at City Hall, Tuesday, April 5, 2022, in Boston. Wu announced a plan Wednesday, April 6, to buy 20 electric school buses that will be put into service during the next school year, the first step in her plan to electrify the city's entire fleet of more than 700 school buses by 2030. (AP Photo/Charles Krupa)

Boston plans to replace its entire fleet of more than 700 school buses with electric vehicles by 2030, starting with 20 buses that will be taking kids to school some time during the next school year, Mayor Michelle Wu said Wednesday.

The move to address climate change by reducing carbon emissions is the latest step in the city's Green New Deal, which includes a previously announced effort to convert much of its fleet of 1,200 vehicles — not including school buses or public safety vehicles — to zero-emissions vehicles.

“Electric vehicles will help reduce emissions across Boston," Wu said at a news conference at Madison Park Technical Vocational High School, where she also announced that the school’s automotive technology program would start teaching students electric vehicle maintenance. “Transportation represents the second highest source of emissions across our city and the first, highest, source of emissions if you look statewide.”

The estimated $7 million cost of purchasing the first 20 electric buses will be paid for with funds from the school department’s operating budget as well as federal coronavirus stimulus funds, officials said.

According to the U.S. Environmental Protection Agency, exposure to diesel exhaust can lead to serious health conditions like asthma and other respiratory illnesses and can worsen existing heart and lung diseases, especially in children and the elderly.

“This is absolutely the right move," said Staci Rubin, vice president of environmental justice at the Conservation Law Foundation, an environmental group. “Electric school buses dramatically improve air quality and our children deserve to be in a tailpipe emissions-free vehicle."

Electric buses are also less expensive to maintain and operate when compared to petroleum-fueled vehicles, she said.

Rubin urged the city to put the initial 20 electric buses on routes that serve students of color and low-income residents, who are the most susceptible to poor air quality and the resulting health issues.

School districts across the country, including in Florida, Maryland and California, have either started or announced plans to transition to electric school buses.

“This opportunity to electrify our fleet is critical to achieving an equitable local Green New Deal," Stanislaus said.