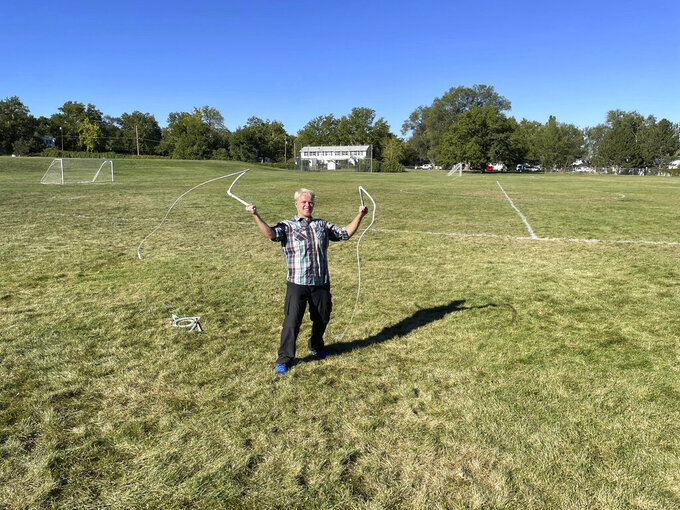 Tim Vandenack, ASSOCIATED PRESS
Danny Shaw displays his skills with whips at Grandview Park Sept. 21, 2021, in Ogden, Utah. Shaw won four gold medals in all at the L.A Whip Conventions of 2020 and 2021 and he’s hoping to parlay the skill into something bigger — a profession. (Tim Vandenack/Standard-Examiner via AP)

“As soon as you learn to crack it, you’re having fun,” he told the Standard-Examiner.

Shaw, 19, is part of a small group of aficionados so skilled with whips that they’re almost like appendages to their bodies. The young Ogden man won four gold medals in all at the L.A Whip Conventions of 2020 and 2021 and he’s hoping to parlay the skill into something bigger — a profession.

“I would like to go to shows and perform around the country,” he said, maybe at rodeos or renaissance festivals.

For now, he performs at birthday parties, at talent shows and for groups of friends and acquaintances. Each one awestruck by his skills. He’ll also get the whips out and practice in the yard of his Ogden home.

“It’s not huge,” he said of the activity. “It’s not like swimming or basketball.”

But somehow, it got a hold of Shaw, featured in the city of Ogden’s #StillUntamedSeries that highlights local groups and people. “It just came up on me. I didn’t expect it,” he said.

Maybe it was destiny, but his involvement with whip cracking has its roots in the martial arts studio his dad used to run. One of his dad’s students paid for lessons with a whip and young Shaw took an interest in the device, particularly when he learned how to properly crack it.

He worked on his speed, aiming for cracks in quicker and quicker succession. Along the way, he started using two whips at the same time, one in each hand. He can even split a soda can with a whip.

Now when he performs, his arms rapidly move side to side, up and down. The whips — two of them — flail at his bidding, wild but controlled, perilously close at times to tangling. Crack! Crack! Crack! Crack! Crack! It gives his arms a serious workout and the loud cracks once prompted a neighbor to call the police on him, worried by the sounds, perhaps, or just annoyed.

Whatever the case, he loves doing it, sees handling whips — long ones, medium ones, short ones — as his calling. He likes the activity, he says, “because it’s so dang fun.”