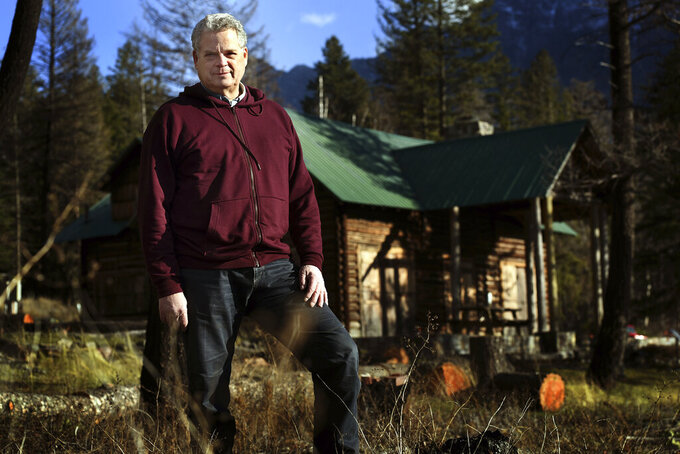 Jeremy Weber, ASSOCIATED PRESS
Glacier National Park historical architect Kim Hyatt stands in front of the Wheeler Cabin on the shore of McDonald Lake in Glacier park on Nov. 17, 2020. Hyatt is in charge of preserving the more than 700 historical buildings and structures inside the park. (Jeremy Weber/The Daily Inter Lake via AP)

As the park’s historical architect, it has been Hyatt’s duty for the past two years to ensure that any work done on the park’s buildings and structures is done in a way that preserves their history.

With Glacier National Park’s 400-plus historic buildings and more than 300 historical structures, Hyatt has no shortage of projects from which to choose.

“As you can imagine, the Park Service has a huge inventory of historic buildings. We are all about preserving the cultural and natural resources for the public to enjoy. Those cultural resources include our historic buildings,” Hyatt explained. “A lot of people don’t realize that we define historic as anything more than 50 years old. If it is 50 years old or older, we have an obligation to care for it, whether it is an old hotel or a privy.”

For Hyatt, the love of old buildings began as a small child when his family took a road trip from their home in Salt Lake City throughout the Southwest, deep South and as far up into New England as Vermont.

“That trip really began a love of antiques and old buildings,” Hyatt told the Daily Inter Lake. “I feel incredibly lucky to have been able to make a career out of what began as a love of old buildings when I was only 7 years old.”

Inspired by that family vacation, Hyatt went on to become a licensed architect and worked in several offices, but his love of old buildings continually drew him to those types of projects.

“Buildings are the most prominent evidence of our history and connecting people to that history is important to me,” he said.

When the opportunity came along for Hyatt to join the National Park Service as Bryce Canyon’s historical architect 10 years ago, he jumped at the chance. A decade later, he says it was one of the best decisions of his life.

Over the years, Hyatt has been involved with a number of projects with the National Park Service in several states, including Utah, Texas, Oklahoma, Arizona, New Mexico and Montana, among others. Hyatt’s designs include a new comfort station at the Big Bend of the Going to the Sun Road in Glacier National Park, built with a vegetated roof into a hillside to protect from the area’s frequent rockslides, and the new fossil discovery exhibit at Big Bend National Park in west Texas.

With a large number of buildings and structures constructed during the National Park Service’s Mission 66 campaign now becoming more than 50 years old, Hyatt and his fellow National Park Service historical architects have plenty of new projects on tap. Celebrating the Park Service’s 50-year anniversary, from 1956 to 1966, the program led to the construction of many new structures, including visitor centers, housing, improved roads (including the Camas Road in Glacier), comfort stations, campgrounds and more.

Unfortunately, limited funding for restoration and upkeep means Hyatt has to choose his projects wisely.

“When those all hit that 50-year mark, it really increased the Park Service’s inventory of historic buildings pretty much overnight. It was a bit overwhelming, to be honest. We now have all of these historic buildings and not a lot of money to care for them,” he said. “Buildings don’t last if they are not used, and it is no different with our historic buildings. Nothing lasts forever. We simply have more buildings than we can use on a regular basis.”

Restrictions on funding sources means Hyatt and the Park Service’s other historical architects must be very selective with which projects to undertake, many times with several parks competing for the same funding source.

“A project might not be able to fit the criteria for one funding source, but does for another. That’s how the priority of many projects gets determined. It’s all about what kinds of funding is available,” Hyatt explained. “With those kinds of limitations, we do have to be selective with our projects. There are a lot of neat buildings in the park that I would love to see us be able to put money into, but we are forced to pick and choose what we can do.”

In the upcoming year, Hyatt is working on several new projects in Glacier, including completing the new Camas entrance station as well as rehabilitating up to a dozen bridges and even a project to replace the bridge over North McDonald Creek, which will begin in the spring.

“I think I have a job for about as long as I want it,” Hyatt said with a laugh. “There sure is plenty to do around here.”