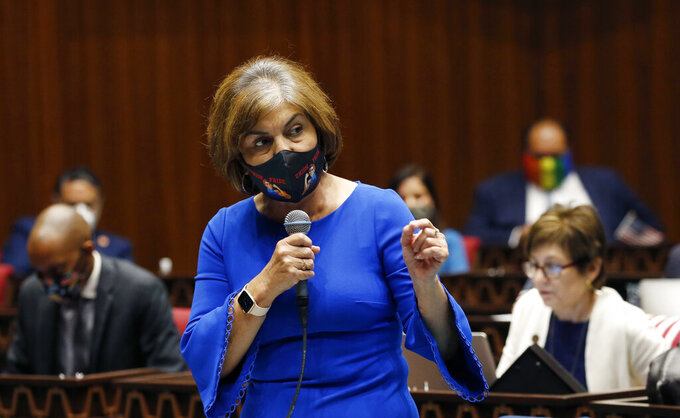 PHOENIX (AP) — Two prominent Democrats announced Thursday they're stepping down from the Arizona House, further shaking up a Legislature that has seen a flurry of resignations ahead of the 2022 session.

Biden appointed Fernandez to be the U.S. Agriculture Department's state director for rural development in Arizona. Fernandez has represented the 4th Legislative District stretching from southwestern Arizona to the outer reaches of the Phoenix metro area since 2015. The district is home to farms producing most of the nation's lettuce during winter months.

“I have had the opportunity to represent working families, teachers, farmers and so many more who have taught me the great need for continued action across our state,” Fernandez wrote in her resignation letter addressed to Reps. Rusty Bowers, the Republican House speaker, and Reginald Bolding, the minority leader. “I will continue serving those communities, with the same Democratic values, in a new capacity as I move on to a new chapter.”

She gave up the minority leader job after a disappointing showing for House Democrats in the 2020 election, which included the unexpected loss by Democratic Rep. Gerae Peten to a Republican in the same district as Fernandez.

Friese in September abruptly dropped out of the campaign for an open congressional seat in Southern Arizona despite his fundraising lead among Democratic candidates. He cited his desire to focus on his medical career for that decision as well.

Friese treated then-U.S. Rep. Gabrielle Giffords after she was critically wounded in the Jan. 8, 2011, mass shooting in Tucson. He is a trauma surgeon who has served in the Arizona House since 2015.

“I am extremely proud of my service to my community and the state during the seven years I represented Legislative District 9,” Friese wrote in his resignation letter.

The departures of Fernandez and Friese further shake up the Legislature, which has seen an unusually high level of turnover this year with several lawmakers quitting for a variety of reasons or moving from the House to the Senate.

Fernandez is the second House Democrat to leave for a Biden administration job, following Arlando Teller's appointment earlier this year as deputy assistant secretary for tribal affairs at the U.S. Department of Transportation.

Both Fernandez and Friese said their resignations are effective Nov. 15. Democratic precinct committee leaders in each district will nominate a list of potential replacements, with the final decision made by the elected supervisors in their home counties. State law requires their successors to be from the same political party.