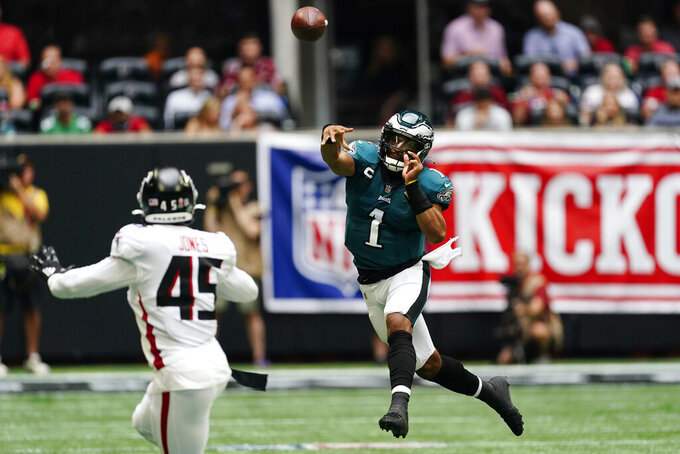 PHILADELPHIA (AP) — One of the most striking elements about the Philadelphia Eagles’ dominant season-opening victory was how well first-year coach Nick Sirianni catered his offensive concepts to the skill set of quarterback Jalen Hurts.

Hurts, always dangerous as a runner, completed 52% of his passes with a passer rating of 77.6 as a rookie last season under former coach Doug Pederson. Against Atlanta, Hurts was in complete control, completing 77.1% of his passes for 264 yards and three touchdowns. He compiled a 126.4 passer rating and gained 62 yards on seven carries, several of them designed runs.

Sirianni said the key to making Hurts a more efficient passer wasn’t any technical adjustment. Rather, it was making sure Hurts was comfortable and confident in what he was being asked to do.

“That’s just getting the reps of the plays that we know we’re going to run,” Sirianni said Wednesday as the Eagles prepared for Sunday’s home opener against San Francisco 49ers (1-0). “We feel confident that he’s read a lot of these (defensive) things multiple times throughout camp.

Hurts, who spoke to reporters after Sirianni, said “the whole entire game is about being on the same page and communicating — knowing what we’re trying to do, know(ing) how to do it, and going out there and executing.”

Sirianni referred to his former Mount Union coach, Larry Keheres, instilling in him the importance of fitting schemes around players’ skills.

Hurts has permission to audible at the line of scrimmage but he’d have to call a variation of the original play.

Hurts’ impressive performance in the opener led more people to buy his No. 1 jersey. The Fanatics sports apparel company announced that Hurts' jersey rocketed to No. 2 overall in NFL sales, up 500% from the previous week.

NOTES: Rookie OL Landon Dickerson, the Eagles’ second-round draft pick, was a full practice participant Wednesday for the first time. Dickerson was drafted while recovering from a torn ACL suffered in the SEC championship game. ... Several Eagles veterans either didn’t practice or were limited, with a “rest” designation. ... S Marcus Epps continues to recover from the concussion he suffered in Atlanta. ... An ankle injury kept WR J.J. Arcega-Whiteside from practicing. ... Rookie WR DeVonta Smith presents a subdued, businesslike demeanor with reporters. Asked about Smith dancing bare-chested in the locker room after the win in Atlanta, fellow WR Jalen Reagor said: “Y’all see ‘DeVonta,’ we see ‘Smitty.’ He’s always having fun.”