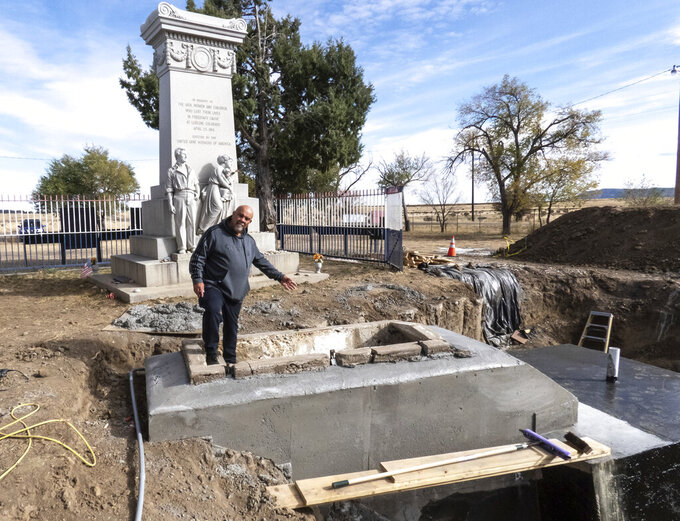 Shanna Lewis, ASSOCIATED PRESS
United Mine Workers representative Bob Butero talks about the significance of the Ludlow Massacre Memorial site as he stands at the top of the stairs leading into the cellar where the women and children died during the 1914 violence in Pueblo, Colo. (Shanna Lewis/KRCC News via AP)

PUEBLO, Colo. (AP) — The Ludlow Massacre more than a century ago was one of the most violent events in U.S. labor history and a wake-up call for the nation about brutal and often deadly coal mine work.

Recent preservation efforts at the site about an hour south of Pueblo have revealed symbols hidden for around a hundred years, KRCC-FM reports.

In 1914, southern Colorado coal miners were on strike to fight for safe working conditions and fair wages. On the day after their Greek Easter celebration, bullets flew through the sprawling United Mine Workers Ludlow tent colony. To escape the violence, four women and 11 children climbed into a hole dug in the ground beneath a tent. Then company thugs torched the encampment.

“My grandmother and another woman were the only two people who walked out of that pit alive,” Mary Elaine Petrucci told KRCC in 2014. She said the others suffocated in the dirt cellar as the tent colony burned.

In total, 21 people were killed in the fire or shot to death that day. Now a solemn granite monument stands on the windswept prairie near the mountains. Near the memorial’s base, there’s a heavy metal door covering concrete stairs leading into what was the cellar.

“It’s sacred ground to me,” said the UMW’s Bob Butero.

The union erected the monument in 1918, Butero said, and soon after they lined the walls of the earthen pit with concrete.

But after a century, the old concrete was crumbling, so this fall a historic restoration company came in to stabilize it. A backhoe dug around the outside of the cellar to expose the exterior walls. As contractor Andy Carlson removed soil he saw some raised lines in the concrete.

“We realized it was a cross that was basically formed into the concrete and was now visible probably for the first time ever since the miners walled up the place from the inside,” Carlson said.

Contractors cleaned more dirt from the concrete to reveal the shape of a shield surrounding the cross, impressions of symbols that had apparently been carved into the original earthen walls of the cellar.

“It just made this amazing sight to have this little structure with a cross on it,” Carlson said. “It almost looked like it was a chapel of some sort.”

Inside the old vault, now encased in new concrete, Butero pointed to the section of the interior wall.

“As you could see (there) was no evidence of the cross or anything on here,” he said. “So that was all on the other side. If we would’ve never excavated it, it would have never been exposed.”

They don’t know who made the symbols or when, according to Butero.

Archeologist Karin Larkin said something else turned up too.

“Between the cellar and the monument, we actually found a tent stake that was still in situ - in place. We could see the burnt ground surface,” she said. “That tent stake would have been holding down the tent that covered the cellar, the death pit, where the women and children were killed.”

Larkin curates the Ludlow Archeological Collection at University of Colorado Colorado Springs. She said the tent stake and other Ludlow artifacts help tell a more complete story about what happened there. But, she said, it’s more than that.

“This tent stake, even though it’s not an animate object, was here and witnessed this event,” she said. “It’s a tangible reminder of this terrible event.”

Although the strike failed to change much in 1914, Butero said it got the nation’s attention on the deadly working conditions in coal mines. Eventually, safety regulations were put in place along with fair wages.

“All of that was what these people died for. I stand on these people’s shoulders for mine health and safety,” he said.

The archeologists, historians and union photographed the symbols before enclosing it with new concrete, covering the symbols again and putting the dirt back around the cellar.

“Until we uncovered it from the outside, no one had ever seen this cross because even the folks who were pouring the (original) concrete didn’t see the concrete cross,” Carlson said.

“For about a week, it was exposed. Now it’s gone forever because with 10 inches of new concrete on it, it can never really be revealed again. It would be destroyed if anyone tried to look at it.”

The Ludlow Massacre Memorial site is expected to reopen to the public soon.