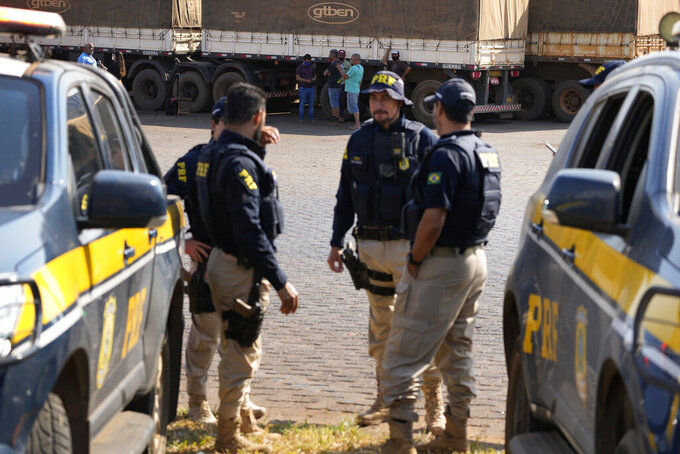 RIO DE JANEIRO (AP) — Protesting truckers snarled traffic along highways in many Brazilian states on Thursday as President Jair Bolsonaro asked them to stand down and later published an unusual statement backpedaling his comments that inflamed political tensions.

Bolsonaro rallied supporters on Tuesday to coincide with Independence Day and show strength as his approval ratings slide and he feuds with the Supreme Court. Truckers turned out in force, even parking on the capital’s central mall. Two days later, some truck drivers remained mobilized, raising concern that Bolsonaro may have lost control of some of his most fervent supporters after firing them up.

Many truckers were protesting against the top court in common cause with the far-right leader, who has blamed its justices for opposing his push for reform of the nation’s voting system and overseeing what he claims are political investigations and arrests.

Bolsonaro on Thursday met with several truckers in capital Brasilia and also sought the counsel of former President Michel Temer, who defused the 11-day truckers' strike in 2018 that crippled the nation. That episode proved the difficulty of negotiations, as many drivers are independent or belong to different unions.

The prior evening, truckers were leery of the authenticity of an audio message Bolsonaro recorded in which he asked them to end their protest, and expressed concern blockages could further stoke inflation and cause shortages. His infrastructure minister, Tarcisio Gomes de Freitas, recorded a video late Wednesday assuring them the president’s audio was real.

The Infrastructure Ministry said on its Twitter account Thursday afternoon that truckers were concentrated on federal highways in 13 of Brazil’s 27 states, down from 15 earlier in the day. It said none of the demonstrations were blocking traffic entirely any longer.

“The administration looks well positioned to bring the situation under control, without significant bottlenecks reported. However, the episode is suggestive of a bigger problem: Bolsonaro’s challenges to control the most radicalized members of his base of support,” Carlos Nepomuceno, Brazil analyst at political risk consultancy Eurasia Group, wrote in an emailed note.

During the Sept. 7 protests, Bolsonaro said he will no longer comply with any decision from Justice de Moraes, who is overseeing an investigation into the dissemination of allegedly false news, targeting the president and two of his sons. That led Supreme Court Chief Justice Fux to issue a sharp rebuttal, saying that such non-compliance, or encouraging others to disobey rulings, would constitute an impeachable crime. Centrist politicians for the first time began publicly floating the possibility of backing impeachment proceedings.

In a 10-point “Declaration to the Nation” published Thursday afternoon, Bolsonaro conveyed contrition for his repeated attacks against the Supreme Court, but stopped short of issuing an full-throated apology.

"People in positions of power do not have the right to 'push the limit' to the point of harming the lives of Brazilians and the economy,” his statement read. “I want to declare that my words, sometimes blunt, resulted from the heat of the moment and of the clashes that were always aimed at the common good.”

The truckers’ strike in 2018 caused food prices to spike, grocery market shelves to empty of some products and gas stations to run out of fuel. It caused billions in losses and revealed the vast power that organized truckers possess.

Bolsonaro, at that time a lawmaker and months away from winning the presidential election, was an outspoken supporter of the truckers, and they became a constituency of his.

But he is now president and inflation that has already surged to near double digits is a key contributor to his falling approval ratings. Early polls show him losing his reelection bid next year.

On Thursday, federal police across the country were still working to free up blockades, and there were reports of persisting traffic jams caused by truck drivers in several states.

Among the Bolsonaro supporters ignoring Bolsonaro's call to stand down was Marcos Gomes, better known by his nickname Zé Trovão or “Joe Thunder,” who has become a social media star among the president's backers. Gomes posted calls for people to join the protests on messaging app Telegram.