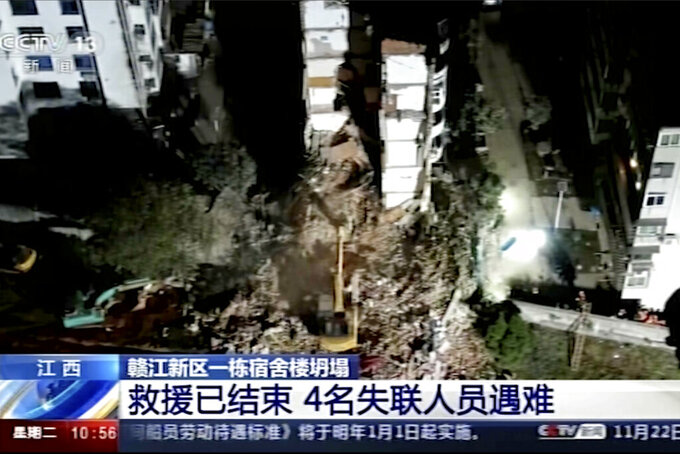 Uncredited, ASSOCIATED PRESS
In this image image from the video footage run on Nov. 23, 2021, by China's CCTV, rescue workers dig near a collapsed portion of a workers' dormitory in Ganging New District in southern Chinese province of Jiangxi. Some people have died in the collapse of a workers' dormitory in the southern Chinese province of Jiangxi, state media report. Chinese characters in blue reads "Search ended, 4 missing are dead" (CCTV via AP)

BEIJING (AP) — At least four people have died in the partial collapse of a workers’ dormitory in the southern Chinese province of Jiangxi, state media report.

Part of the six-story building in the province’s Ganjiang New District tumbled down Monday evening, they said.

The building housed workers who had originally worked at a pharmaceutical plant and most of the residents were elderly, according to state broadcaster CCTV and other outlets. The building was constructed in 1995 mainly out of prefabricated slabs and was considered to be poor quality, they said.

Photos and video showed rescue crews searching through a pile of rubble under floodlights. Much of the building, one of several similar structures in the compound, remained standing.

China has sought to improve construction quality and industrial safety with the threat of prosecution, but accidents still occur as companies cut corners to save costs.

Aging infrastructure is also a growing problem, with gas line explosions a particular threat, along with weak adherence to safety standards for the handling of volatile chemicals.