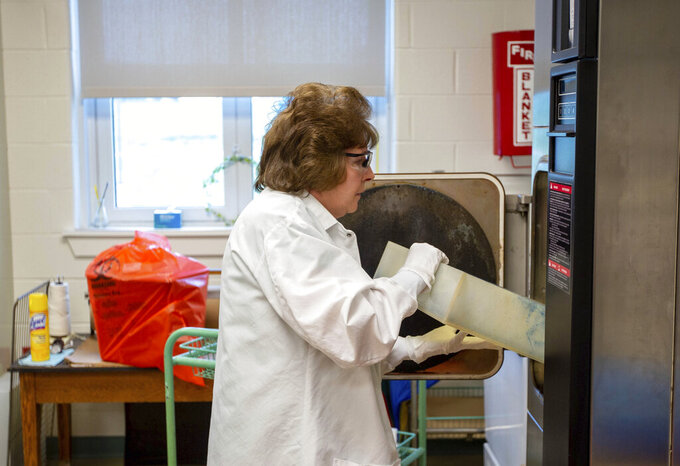 Daniel Lin, ASSOCIATED PRESS
In this Aug. 31, 2021 photo, Aleta Kimble Reedy loads an autoclave as she sterilizes items in the Virginia Department of Agriculture and Consumer Sciences lab in Harrisonburg, Va. (Daniel Lin/Daily News-Record via AP)

HARRISONBURG, Va. (AP) — Aleta Kimble Reedy has spent the majority of her life within the walls of the Virginia Department of Agriculture and Consumer Services’ Regional Animal Health Laboratory in Harrisonburg.

Her grandmother, Hilda Lambert, worked as a laboratory research aide at the lab for 32 years.

And for the last 38 years, Reedy has also worked the same position — becoming a third-generation laboratory research aide at the facility.

“It’s been amazing,” Reedy said. “Usually, that doesn’t happen within a family where three generations get to work in the same department.”

Reedy, 58, of Harrisonburg, never imagined she would work the same job both her mother and grandmother did, but remained hopeful that one day she might.

As a child, Reedy said, she had many opportunities to visit the Regional Animal Health Laboratory and would watch her grandmother and mother share their responsibilities with each other throughout work days.

“We would get to come up there and watch them do the stuff that they did,” she said. “It was interesting to see the different things that went on at the lab. It was a different experience.”

There are four Regional Animal Health Laboratories in the state — one in Harrisonburg and the others in Lynchburg, Warrenton and Wytheville.

The labs offer a variety of services in bacteriology, serology, virology, parasitology, pathology and molecular testing, according to VDACS. The labs also perform necropsies, bacteriological cultures, identification and sensitivity testings, and microscopic examinations of tissues.

Being able to get an up-close look at the inner workings of the laboratory sparked an interest for Reedy, she said, and when an opening for a research aide opened up, submitting an application was a no-brainer.

Reedy said she was working at James Madison University cleaning dorm rooms and offices when the position opened at the laboratory.

“I applied for it and got the position,” she said.

Until her mother retired in 2011, Reedy and Kimble spent the majority of their days together. The mother and daughter carpooled to work in the mornings and evenings, and shared an office.

As laboratory research aides, Reedy said the pair were tasked with cleaning glassware from all the lab departments, taking care of laundry and properly disposing of waste materials.

Reedy said she also takes care of shipping samples out to other laboratories.

Being able to work alongside her mother was an enjoyable experience, Reedy said, and one not many get.

“I’m glad that I got to actually work with my mother,” she said. “My grandmother retired before I got to work with her, but it’s been enjoyable. I like my job, and I enjoy doing what I do.”

Reedy said one thing she has learned over the years is how little others in the community know about what happens at the Regional Animal Health Laboratory.

“People don’t realize what the lab actually does,” she said.

A large portion of work done at the lab revolves around testing various samples, whether dairy testings or animal testings.

More than 300,000 samples are tested per year, and Harrisonburg’s laboratory is the largest in Virginia in terms of testing and employees, according to Jess Walters, program manager for the Office of Laboratory Services for VDACS.

Reedy said how testings are performed has evolved over time, adding that tools used to perform testings and the steps taken have been modernized.

“Things are a lot different now,” she said.

Reedy said the generations of her family working at the lab will end with her as she has no children and her brother’s children are not interested in the line of work.

Despite the situation, Reedy said her time at the lab has been special and something she will cherish.

“I’m just happy I got to do this with my mother,” she said. “It’s been an adventure, and I hope a lot of other people get to enjoy doing something like that with their parents and keeping the generation going in a workplace.”