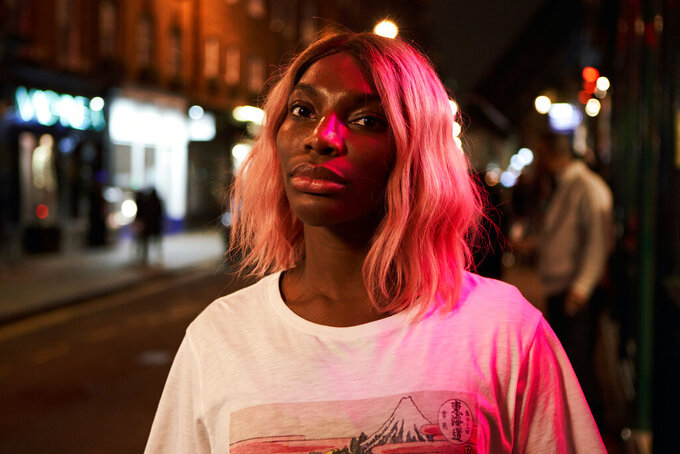 Uncredited, ASSOCIATED PRESS
This image released by HBO shows Michaela Coel in a scene from "I May Destroy You." The program is nominated for an Emmy Award for outstanding limited series. (HBO via AP)

Feeling lucky, Mr. Mandalorian? How about you, Duke of Hastings?

The Emmys tend to field an eclectic group of contenders, and increasingly so as new platforms have expanded television's scope and sophistication.

Versions of sci-fi and comic book epics have jumped from the big screen to the small, resulting in matchups such as space adventure “The Mandalorian” and period British romp “Bridgerton.” Marvel's “WandaVision” is competing with the sexual assault drama “I Will Destroy You.”

Sophomore “The Mandalorian” tied “The Crown” for most nominations, 24 each, and there’s growing TV academy respect for genre fare. But “Game of Thrones” record may be predictive: It didn’t slay its best-drama rivals until season five.

Should win: “This Is Us." It's been 15 years since a network winner (Fox's "24" in 2006), and NBC's series has been the sole broadcast nominee in recent years. Its nuanced storytelling about race, class and sexuality in everyday life shouldn't be rare, but it is.

Will win: “The Crown.” As the British royal family saga entered the modern Charles-Diana era, its imaginary keyhole-peeking became even more brazen and captivating. Plus it has Gillian Anderson as a not-so-Iron Lady.

Should win: “Ted Lasso.” A sick, weary and cynical world needed a break, and Coach Lasso and his chirpy optimism came through with enough wit — and dashes of crass humor — to avoid giving us all a sugar rush.

Will win: “Ted Lasso." Because we can't take more disappointment.

Should win: “Hacks” is sharply written, satirical and a brilliant examination of the generational gap. Plus, it stars one of our great actors at the height of her powers (Jean Smart).

Will win: “Ted Lasso.” From sleeper hit to world conquering series, this tale of an American disruptor in England has a sweet heart and dollops of empathy. It's like those little cookies Ted brings his boss every morning. England may win best drama, but the comedy crown is all America, baby.

Should win: Aduba. Not since Dr. Melfi coaxed Tony Soprano into spilling his emotional guts have we wanted a therapist's number. Aduba won two Emmys as inmate Crazy Eyes and a third portraying the legendary Shirley Chisholm. Another, please.

Will win: Corwin. Defying the fairy-tale Princess Di fixed in the public imagination, Corwin skillfully creates a charming but mercurial young woman we accept on the drama's terms. And the late Diana's memory remains powerful.

Should win: Colman. All hail the queen! She didn't win an Emmy last year as a fantastically prickly Queen Elizabeth II — a most unfortunate oversight, I dare say — but must this year. I say, must.

Will win: Corrin, riding the burst of new media interest in Princess Diana, will defeat her co-star, the queen (fitting revenge). Corrin won a Golden Globe over Colman this year and that pattern is expected to continue.

Should win: Majors. His open-faced vulnerability and muscular intensity were a match for the show's visceral depiction of racism and other horrors. (A moment here to honor the late Michael K. Williams, Major's co-star and a supporting actor nominee.)

Will win: O'Connor. Whether O’Connor’s feckless, self-absorbed, entitled (we’ll stop now) version of Prince Charles is true to life, it has a magnetic honesty. His angst-filled pas de deux with Corwin's Diana seals the deal.

Should win: Brown. He's already gotten one Emmy as Randall Pearson in “This Is Us” but he deserves more. His perpetually unsure brother-dad-son on the show is a portrait both lovingly comedic and dramatically empathetic.

Will win: O’Connor. His slightly bemused, morose and frightfully shy, hands-deep-in-pockets approach to the prince is astonishing. The real Prince Charles should shock the telecast by handing him the Emmy.

Should win: Smart. She's been an Emmy bridesmaid 10 times before as supporting or guest actor and laid claim to three trophies. Put her in a dramedy starring role and guess what? She kills.

Will win: Smart, no contest. Her victory, following that of 2020 winner Catherine O’Hara for “Schitt's Creek,” shows that getting respect from an industry dismissive of older female actors is easy — be brilliant.

Should win: It's smart what you said there, Lynn. Very smart.

Will win: Hopefully, the Emmy voters caught the strong summer love for Smart, who last won an Emmy in 2008 after back-to-back wins in 2000 and 2001. “Hacks” is made for her — whip smart and abrasive yet vulnerable. Plus, she will have just turned 70. Let's give her a birthday present.

Should win: Macy. His role as a shambling, tragicomic mess of an impoverished patriarch in the now-ended series was just one more of the character actor's indelible creations. Not heroic enough, academy? Or maybe he makes it look too easy.

Will win: Sudeikis. Yes, there is a deep-bench cast of rogues and schemers supporting him. But the show's conceit is dependent on Sudeikis giving the character honesty and charm without smarm, and he does.

Will win: In a year when sweetness and compassion is rewarded, Sudeikis is the beneficiary. Season 2 of “Ted Lasso” drifts away from his anchoring role, but the debut season is all Sudeikis, a charming fish-out-of-water. Give that man an Emmy and let's hope he dresses for the occasion this time.

Nominees: “I May Destroy You”; “Mare of Easttown”; “The Queen’s Gambit”; “The Underground Railroad”; “WandaVision.”

Should win: “I May Destroy You." A young Black woman's fateful night out in London unspools a provocative, unconventional drama that was showered with awards and turned creator-star Michaela Cole into a generational voice.

Will win: “The Queen's Gambit." A sleek production, the intriguing championship chess world setting and the breakout performance of star Anya Taylor-Joy combine to give the coming-of-age tale a dominant strategy.

Should win: “I May Destroy You," exploring the question of sexual consent in contemporary life. Powerful, unpredictable, provocative and riveting, it was the best thing on TV this year, hands down.

Will win: “Mare of Easttown.” The safer choice, a ho-hum crime drama with lots of Method acting, frumpy outfits and accent work. Worthy also is the stylish “The Queen’s Gambit,” but Kate Winslet's starry lead as Mare elevates her drab detective character to the win. Hip hip, hooray?