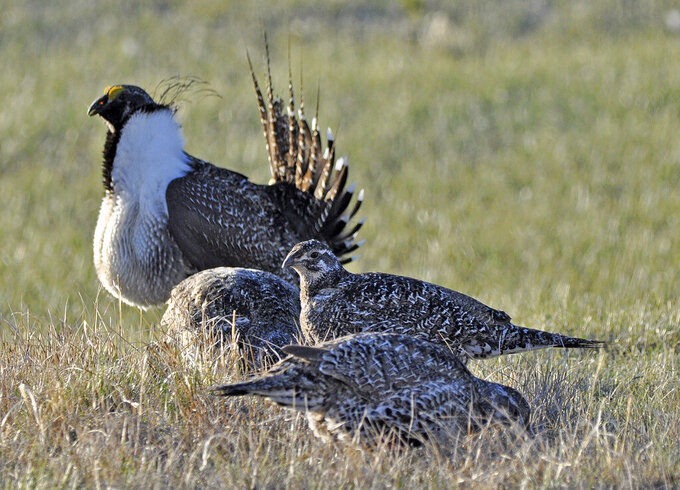 Jeannie Stafford, ASSOCIATED PRESS
FILE - In this March 1, 2010 file photo, from the U.S. Fish and Wildlife Service, a bi-state sage grouse, rear, struts for a female at a lek, or mating ground, near Bridgeport, Calif. A federal judge has ruled that the Trump administration illegally withdrew an earlier proposal to list the bi-state sage grouse as a threatened species along the California-Nevada line in 2020. (Jeannie Stafford/U.S. Fish and Wildlife Service via AP, File)

RENO, Nev. (AP) — A federal judge has ruled the Trump administration acted illegally in 2020 when it withdrew an earlier proposal to list as threatened a hen-sized bird found only in the high desert along the California-Nevada line.

It’s the latest development in the on-again, off-again protection of the bi-state sage grouse — a cousin of the greater sage grouse — under the Endangered Species Act over the past two decades.

Greater sage grouse live in sagebrush habitat in 12 western states, including California and Nevada, while bi-state grouse exist only along the Sierra’s eastern front. Threats to the survival of both include urbanization, livestock grazing and wildfires.

U.S. District Judge Jacqueline Scott Corley in San Francisco said Monday the agency relied on flawed assumptions to conclude in 2020 that the ground-dwelling bird “is not likely to become an endangered species within the foreseeable future throughout a significant portion of its range.”

She reinstated the U.S. Fish and Wildlife Service’s original 2013 listing proposal for the bi-state grouse and ordered the agency to issue a new final listing decision.

After rejecting listing petitions in 2001 and 2005, the Fish and Wildlife Service proposed threatened status for the bi-state grouse for the first time in 2013 but abandoned that proposal two years later.

In 2018, another U.S. judge in San Francisco found the agency had illegally denied the bird protection and ordered it to reevaluate its status.

The agency then again proposed for protection, but in March 2020 the Trump administration withdrew that proposal. The service said at the time its latest review indicated the population had improved, thanks largely to voluntary protection measures adopted by state agencies, ranchers and others.

The Western Watersheds Project, WildEarth Guardians and Center for Biological Diversity filed a lawsuit challenging that decision in October 2020. The judge on Monday agreed with their claims the agency’s action was “arbitrary and capricious.”

The Fish and Wildlife Service estimates the bi-state grouse population is half what it was 150 years ago along the eastern front of the Sierra Nevada.

About 3,500 of the birds are believed to remain across 7,000 square miles (18,129 square kilometers) of mostly high desert sagebrush stretching from Carson City to near Yosemite National Park.

“We’ve watched for more than a decade as these sage grouse have continued to decline,” said Ileene Anderson, a senior scientist at the Center for Biological Diversity.

“Without the Endangered Species Act’s legal protection, multiple threats will just keep pushing these grouse toward extinction,” she said Tuesday.

Agency officials were reviewing the ruling and had no immediate comment, Fish and Wildlife Service spokeswoman Robyn Gerstenslager said Wednesday.

Among other things, the judge said the service failed to adequately analyze the impact that the bird’s dwindling numbers in small population management units could have on its overall risk of extinction.

Lawyers for the service had argued any errors in the review’s scientific assumptions weren’t serious enough to change its conclusion about the bird’s overall status. The judge disagreed.

“These errors go to the heart of the service’s listing decision and are not harmless,” she wrote.