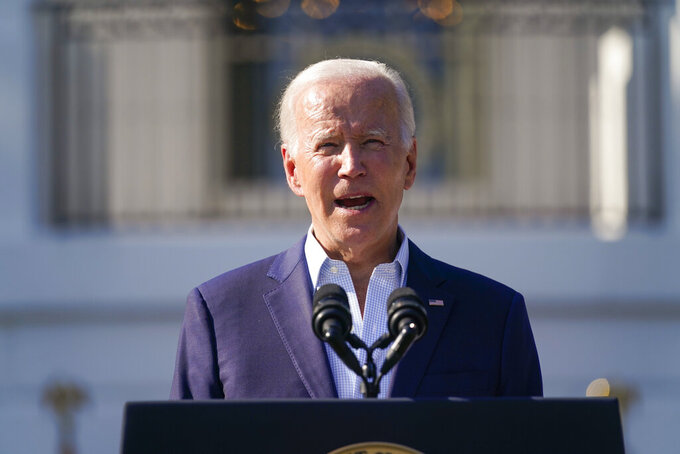 Evan Vucci, ASSOCIATED PRESS
President Joe Biden speaks on the South Lawn of the White House, Monday, July 4, 2022, in Washington. With his party struggling to connect with working class voters, President Joe Biden on Wednesday plans to use the backdrop of the Iron Workers Local 17 Training Center in Cleveland to tell workers his administration’s policies would shore up funding for roughly 200 multiemployer pensions. (AP Photo/Evan Vucci)

WASHINGTON (AP) — Seeking to boost his standing with frustrated blue-collar voters, President Joe Biden on Wednesday will use the backdrop of a union training center in Cleveland to tell workers his policies will shore up troubled pension funding for millions now on the job or retired.

Hurt politically by inflation at a 40-year high and damages wrought by the pandemic, the president is anchoring his message to workers in the former election bellwether of Ohio. The Buckeye State has been trending strongly Republican with Donald Trump easily carrying it twice, and this is Biden's sixth visit as president as he labors to personally reverse that electoral tide.

Biden's speech at the Iron Workers Local 17 Training Center is timed to the announcement of a final administrative rule that is tied to his $1.9 trillion coronavirus relief package from last year. The rule allows troubled multi-company pensions to be made financially whole, ensuring full benefits for 2 million to 3 million workers and retirees.

Details about Biden’s remarks were shared by two administration officials who insisted on anonymity to preview his speech.

The roughly 200 pension plans receiving assistance faced possible insolvency without government aid. Without the full benefits, workers and retirees could struggle to pay for housing, food and other essentials. The financial support should help keep the pension funds solvent for roughly 30 years until 2051.

"The thing of it is, we had a lot of politicians over the years saying, hey, we’ll try to help you, we’ll do everything we can, and nobody’s ever done anything for us until Joe Biden come along,” he said. He said that other Ohio Democrats in Washington kept pushing, too.

Jeffrey Carlson, 67, of the Cleveland suburb of North Ridgeville, said that a year before he retired in 2017, he learned his pension would be cut, too.

“I’m grateful for anything that we could get back," he said. "I know I earned it. I worked hard.”

Carlson, a long-time Democrat, said he knows public opinion has turned against Biden, but he still supports the president.

Multiemployer plans are created through agreements between companies and a union, and are insured by the federal Pension Benefit Guaranty Corporation (PBGC). In 2014, Congress passed the Multiemployer Pension Reform Act that allowed plans, for the first time, to cut workers and retirees' benefits in order to ensure that pensions projected to run out of money remained solvent.

The American Rescue Plan passed in March 2021 included a special finance assistance program that allows struggling multiemployer pension plans to apply to the PBGC for assistance. The final rule being unveiled by the Biden administration is designed to make it easier for the pensions' investments to receive a higher rate of return.

The effort to highlight a program to bolster union workers comes as Democrats hope to pick up a U.S. Senate seat in Ohio, where a strong showing with working class voters could play pivotal role.

Republican Rob Portman is leaving the Senate after two terms. Vying to replace him are Democratic Rep. Tim Ryan and Republican J.D. Vance, the author of the memoir “Hillbilly Elegy” who secured an endorsement during the primary from Trump. Ohio voters backed Trump in 2016 and 2020, with his margin of victory each time at roughly eight percentage points.

While Biden boasts of steady job growth — unemployment sits at 3.6% — Americans have largely been discontented with the Democratic president's handling of the economy as inflation continues to rise, interest rates increase and the stock market wobbles. Just 28 percent approve of Biden’s stewardship of the economy, down from 51% a year ago, according to an AP-NORC Center for Public Affairs Research poll published last week.

Biden has made extensive commitments to boost Ohio's economy. But his efforts suffered a recent setback as Intel postponed the July 22 groundbreaking for a computer chip plant near the state capital of Columbus. The decision came after a planned investment of more than $50 billion in the semiconductor industry stalled in Congress.

Senate Republican leader Mitch McConnell said on Twitter last week that he would block the computer chip bill if congressional Democrats pursue passage of their budget and domestic agenda as planned in the face of Republican opposition.

Biden has highlighted the planned computer chip plant as a commitment to U.S. manufacturing, part of the message he hopes to stress by aiding pensions for plant workers.

His efforts to fund the distressed pensions would extend the solvency of the government's PBGC multiemployer insurance program from 2026 to 2055. Full benefits would be restored to 80,000 workers and retirees who have had their benefits cut.

Biden has often emphasized his administration’s efforts supporting trade union members, who are a major part of his political identity. The president likes to proclaim that the middle class built America and that “unions built the middle class.” In an April speech to union workers in Washington, he offered support for Amazon employees in Staten Island, New York, who had voted to form a union by declaring, “By the way, Amazon, here we come. Watch.”

In May, during an International Brotherhood of Electrical Workers Conference, Biden derided Trump, as “the great MAGA king,” poking fun at the former president’s “Make America Great” campaign slogan that has resonated with many blue-collar voters in the industrial Midwest.

He is hitting repeatedly on an economic theme against Republicans heading into November’s midterm elections, saying that the GOP for all its criticism of him has few tangible solutions to major policy problems facing the country, including spiking inflation.

This story was first published on July 5, 2022. It was updated on July 6, 2022 to correct in 2nd paragraph that the Ohio visit will be Biden’s sixth visit as president to Ohio, not his fourth.