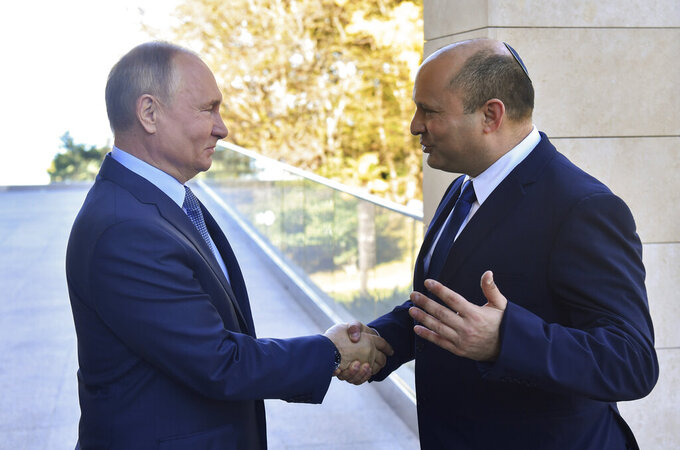 MOSCOW (AP) — Russian President Vladimir Putin expressed hope on Friday that new Israeli Prime Minister Naftali Bennett would continue in the footsteps of his predecessor in maintaining close and “trusting" relations with his country.

After talks at Putin's lush Black Sea residence in Sochi, Bennett hailed bilateral ties as “strategic” and emphasized the need to maintain an “intimate” dialogue with Moscow.

Greeting the Israeli prime minister at the start of their first meeting, Putin described Russian-Israeli ties as “unique,” noting that Israel is home to the largest Russian-speaking community.

Bennett extolled the “great contribution” made by his country's 1 million Russian speakers, and emphasized “the deep connection between the two countries” while praising Putin for bringing them closer during his 20-year rule.

“I can tell you on behalf of the citizens of Israel that we consider you a true friend of the Jewish people,” Bennett said.

Bennett hailed the Soviet role in World War II and talked about a new museum in Israel that honors Jewish soldiers who fought in allied armies, primarily the Red Army. “It's impossible not to appreciate the heroism of the entire Russian nation during those difficult years,” he said in remarks that likely resonated with Putin who cherishes his country's decisive contribution to the victory over the Nazis.

Russia and Israel have developed close political, economic and cultural ties that have helped them tackle delicate and divisive issues, such as the situation in Syria where Moscow has teamed up with Tehran to shore up Syrian President Bashar Assad's rule.

“We will also talk about the situation in Syria, and the efforts to halt the Iranian military nuclear program,” Bennett said at the start of his talks with Putin.

Putin said that Russia has been “making efforts to help restore Syria’s statehood and to strengthen it.” He noted that despite some problems regarding the situation in Syria, "there is also common ground and opportunities for cooperation, especially in terms of the fight against terrorism.”

Bennett said on Facebook that he had an “excellent” meeting with Putin, adding that they discussed a wide range of issues, including “ways to deal with Fundamentalist Islam,” in talks that stretched over five hours.

“Russia is a very important player in the region,” he said, noting that the relations between the two countries are "both strategic and almost daily, and we must maintain a direct and intimate line of dialogue.”

Israel views Iranian entrenchment on its northern frontier as a red line, and it has repeatedly struck what it says are Iran-linked facilities and weapons convoys destined for Lebanese Hezbollah. The Iran-backed militant group has fought alongside Syrian government forces in the country’s civil war.

Russia has waged a military campaign in Syria since 2015, helping Assad’s government reclaim control over most of the country. Moscow also has helped modernize Syria’s military, including providing Assad with air defense systems, and trained its personnel.

Russia and Israel established a military hotline to coordinate air force operations over Syria to avoid clashes. Israel often attacks Iranian-linked targets in Syria, while Russia has provided support to the Syrian government.

In 2018, Russia-Israeli ties were severely tested by the downing of a Russian warplane by Syrian forces that responded to an Israeli air raid and mistook a Russian reconnaissance plane for Israeli jets. All 15 members of the Russian crew died.

Moscow also has played a delicate diplomatic game of maintaining friendly ties with both Israel and Iran. In 2018, Moscow struck a deal with Tehran to keep its fighters away from the Golan Heights to accommodate Israeli concerns about the Iranian presence in Syria.

Russia is one of the international parties that negotiated a 2015 nuclear deal with Iran. The deal fell apart after then-President Donald Trump withdrew in 2018. But President Joe Biden's administration is now trying to revive the deal with other international powers — a step that Israel opposes.

Jack Jeffery contributed to this report from Jerusalem.