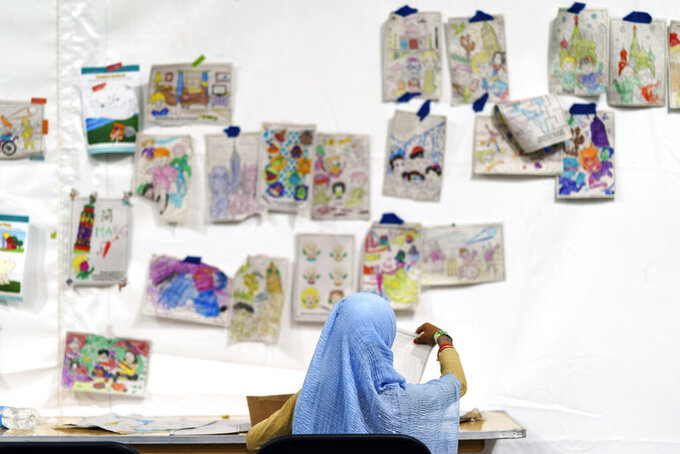 David Goldman, ASSOCIATED PRESS
A child holds up a piece of artwork while drawing in a tent at Fort Bliss' Doña Ana Village, in New Mexico, where Afghan refugees are being housed, Friday, Sept. 10, 2021. The Biden administration provided the first public look inside the U.S. military base where Afghans airlifted out of Afghanistan are screened, amid questions about how the government is caring for the refugees and vetting them. (AP Photo/David Goldman)

KABUL, Afghanistan — More than 250 foreign nationals have left Afghanistan in the past three days, says Zalmay Khalilzad, Washington’s special envoy and the architect of an often criticized deal with the Taliban.

The deal signed last year provided for the safe withdrawal of U.S and NATO troops but say his critics was heavily weighted in favor of the hardline-Islamic movement.

In a series of tweets Khalilzad praised both the Middle Eastern State of Qatar, whose national airline carried out the flights and the “Taliban’s cooperation in this important effort,” for the recent departure of foreign nationals from Afghanistan.

“We will continue to engage the government of Qatar, the Taliban, and others to ensure the safe passage of our citizens, other foreign nationals, and Afghans that want to leave,” Khalilzad tweeted.

However, hundreds of Afghans, including U.S. citizens and green card holders, remain stranded in northern Afghanistan’s Mazar-e-Sharif waiting to be evacuated but stopped by Taliban rulers demanding travel documents.

— Flight takes about 200, including Americans, out of Kabul

UNITED NATIONS -- The United Nations chief says all countries should engage with the Taliban and deliver the same message: The Afghan people should live in peace under an inclusive government that respects basic human rights including for women and girls, and Afghanistan should not be a sanctuary for terrorism anymore and should play a constructive role in international relations.

Secretary-General Antonio Guterres told a news conference Friday “it’s important that independently of different strategies, of different forms of contact, all countries are able to convey the same message and to engage with the Taliban in an effective way.”

Guterres said humanitarian aid is also essential and efforts must be made to prevent “an economic meltdown” in Afghanistan.

He said the country’s financial situation is “very difficult” and “it is essential to find ways, through some waivers or some mechanisms” to inject cash in the economy to avoid a meltdown.

Looking ahead, Guterres said, “what would be positive is to have simultaneously the formation in Afghanistan of an inclusive government” that respects previous international commitments by the Afghan state and takes into account concerns about terrorism, human rights and other issues leading to “a normalization of the relations of the international community with Afghanistan.”

ANKARA, Turkey — The U.N. refugee agency chief said Friday the UNHCR will engage with the Taliban in order provide assistance to millions of displaced Afghans.

Filippo Grandi, the United Nations’ high commissioner for refugees, also said his agency has so far not observed large numbers of Afghans trying to cross into other countries but warned that the situation could change if conditions in the country deteriorate.

“The priority number one for my organization is to step up, scale up our humanitarian work to help those displaced... Winter is coming. It is very cold in Afghanistan during winter,” Grandi said.

The UNHCR chief made the comment in the Turkish province of Gaziantep, near the border with Syria, at the end of a four-day visit to the Turkey.

Turkey, which already hosts some 3.7 Syrian refugees and some 300,000 Afghan migrants, has expressed concern over the potential of large numbers of Afghans heading its way.

ISLAMABAD — Pakistan’s foreign minister says the international community is not in a hurry to recognize the Taliban government, although it has a desire to engage with it.

Shah Mahmood Qureshi spoke at a joint news conference after holding talks with his Spanish counterpart José Manuel Albares in the capital, Islamabad.

Qureshi said that he had come to this belief after having meetings with diplomats from various countries. He said that “people are watching, they are waiting, they are looking at the unfolding events of Afghanistan.”

Qureshi said “I see a desire to engage but not a rush to recognize” the Taliban.

In his remarks, Albares said Spain wants to see a stable and peaceful Afghanistan.

He also said Spain wanted safe transit for those who wanted to leave Afghanistan to travel to Spain.

MOSCOW — Russia’s top diplomat says the foreign is not recommending that an official delegation be sent from Moscow to a ceremony inaugurating a new government in Afghanistan.

Foreign Minister Sergey Lavrov this week appeared to suggest that Russia could send high-level representation to such a ceremony if the Taliban formed a government that sufficiently represented the country’s ethnic groups.

But on Friday he was quoted by Russian news agencies as saying he envisioned only representation by Russia’s ambassador.

BERLIN — German international broadcaster Deutsche Welle says 10 of its correspondents in Afghanistan have left the country for Pakistan, after it was previously unable to get them out of Kabul by air.

Deutsche Welle said in a statement Friday that the journalists, including its only female correspondent in Afghanistan, were able to leave on Thursday.

It didn’t detail how exactly they got out of Afghanistan, but said that “due to a variety of reasons” an evacuation by air had not worked out. The group had waited unsuccessfully outside the Kabul airport for days.

As a result, the broadcaster said, “all options were explored to get the group out of the country by another route.”

Deutsche Welle director general Peter Limbourg thanked the German government, “without whom this evacuation would not have been possible,” and Qatar, which he said made an “enormous effort.” He said authorities in Islamabad had granted permission for the evacuation of the families on humanitarian grounds.

The evacuated correspondents are to be taken to Bonn, Germany. The broadcaster said it is in talks with authorities to bring relatives of the employees of its Dari and Pashto services to Germany, as well as two correspondents and their families who had returned to their hometowns after weeks of waiting in Kabul.

MADRID — Spain’s foreign minister is in Islamabad for talks with Pakistani officials aimed at easing the transit of Afghan people who worked with Spain before Afghanistan’s fall into the hands of the Taliban.

In a video released by the Spanish ministry, Albares said that the goal was to hold talks “with one of the main key players in the region” and find ways to “leave no one behind.” The minister said he would give assurances to the Pakistani government that Spain’s embassy would deal fast with Afghans who worked for the country in order for them not to become a burden for Pakistan.

Albares’ is the first trip by a Spanish foreign minister to Pakistan in 70 years of diplomatic relations.

ISLAMABAD — Pakistan’s foreign minister says it is the collective responsibility of the international community to help Afghanistan to avert a humanitarian crisis.

In a statement Friday, Shah Mahmood Qureshi said that despite having limited resources, Pakistan a day earlier sent a plane carrying food and medicines to Kabul. Qureshi said more such aid will be dispatched to Afghanistan via land routes.

Qureshi made his comments ahead of the visit of his Spanish counterpart, José Manuel Albares, who was expected to arrive in the capital, Islamabad, later Friday, for talks on Afghanistan.

Qureshi said that a humanitarian crisis in Afghanistan wouldn’t be anyone’s interest — in the region or in the world.

Pakistan wants the international community to unfreeze Afghanistan’s assets to enable Kabul use its own money to avert a worsening humanitarian crisis.

The Taliban government currently does not have access to the Afghanistan central bank’s $9 billion in reserves, most of which is held by the New York Federal Reserve. These reserves were blocked amid last month’s political turmoil in Afghanistan.

UNITED NATIONS — The United Nations development agency says Afghanistan is teetering on the brink of “universal poverty” which could become a reality in the middle of next year unless urgent efforts are made to bolster local communities and their economies.

It said the Taliban takeover of Afghanistan has put 20 years of steady economic gains at risk.

The U.N. Development Program outlined four scenarios for Afghanistan following the Taliban’s Aug. 15 assumption of power that predict the country’s GDP will decline between 3.6% and 13.2% in the next fiscal year starting in June 2022, depending on the intensity of the crisis and how much the world engages with the Taliban. That is in sharp contrast to the expected 4% growth in GDP before the fall of the government.

“Afghanistan pretty much faces universal poverty by the middle of next year,” Kanni Wignaraja, UNDP’s Asia-Pacific Director, told a news conference Thursday launching its 28-page assessment. “That’s where we’re heading -- it’s 97-98% (poverty rate) no matter how you work these projections.”

Currently, the poverty rate is 72% and Wignaraja pointed to many development gains after the Taliban were ousted from power in 2001: Per capita income more than doubled in the last 20 years, life expectancy at birth was extended by about nine years, the number of years of schooling rose from six to 10, “and we got women into university.”

But she said Afghanistan now faces “a humanitarian and development disaster” resulting from political instability, frozen foreign reserves, a collapsed public finance system, “a crush on local banking because of this,” as well as the impact of the COVID-19 pandemic.

UNITED NATIONS — The United States has a message for the Taliban: If it lives up to all its commitments, brings greater stability to Afghanistan and the region, demonstrates widespread inclusion, and protects the gains of the last 20 years “we’ll work with it.”

But U.S. deputy ambassador Jeffrey DeLaurentis, who delivered the message at a U.N. Security Council meeting on Thursday, stressed that “any legitimacy and support will have to be earned.”

He said the standards the international community has set are clear and include facilitating safe passage for Afghans and foreign nationals who want to leave Afghanistan and respecting the country’s obligations under international humanitarian law “including those related to the protection of civilians.”

“We’re watching closely to see that those standards are met,” he said.

DeLaurentis told the council that following the U.S. withdrawal and the Taliban takeover, Afghanistan needs the United Nations and the U.N. political mission in the country “more than ever.”

He said “the United States remains committed to the people of Afghanistan,” and as the country’s largest humanitarian donor it is helping partners on the ground provide assistance, “but the needs are vast.”

With the diplomatic footprint in the country reduced, DeLaurentis said, “the U.N. has a vitally important role to play” not only in coordinating aid but in preventing human rights violations and abuses and pursuing accountability for those that have occurred, and in protecting children and civilians.