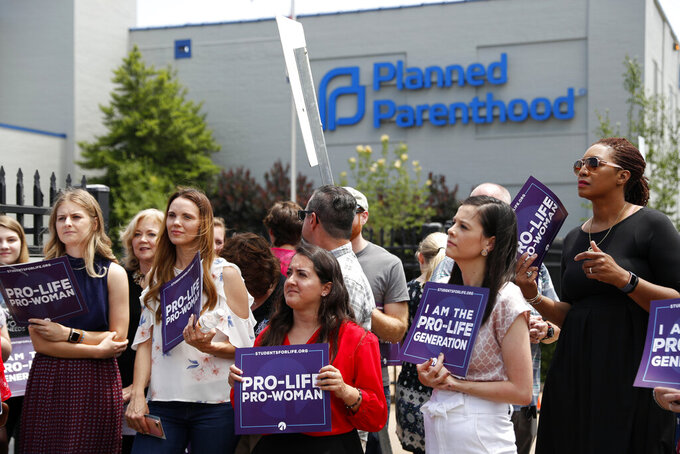 Jeff Roberson, ASSOCIATED PRESS
FILE - In this June 4, 2019, file photo, anti-abortion advocates gather outside the Planned Parenthood clinic in St. Louis. A Missouri law seeking to ban most abortions after 8 weeks of pregnancy spawned a legal battle Wednesday, Sept. 29, 2021, before the state's highest court over whether the people's right to overturn laws passed by the Legislature has been illegally limited by procedural hurdles. (AP Photo/Jeff Roberson File)

JEFFERSON CITY, Mo. (AP) — A Missouri law seeking to ban most abortions after eight weeks of pregnancy led to a legal battle Wednesday before the state's highest court over whether the people's right to overturn laws passed by the Legislature has been illegally limited by procedural hurdles.

The case before the Missouri Supreme Court won't ultimately affect the fate of the anti-abortion law — which currently is blocked by a separate federal court case — but could determine how easy or difficult it is for people to force a statewide vote on future laws they don't like.

The Missouri case is one of several battles around the nation over state election laws that supporters describe as safeguards but which opponents contend are unjustified limits on democracy.

Missouri's constitution includes a referendum right that allows people to challenge a law passed by Legislature by gathering petition signatures to put the measure to a public vote. Petitions must be submitted to the secretary of state’s office 90 days after the end of the legislative session during which the law passed.

The American Civil Liberties Union and the group No Bans No Choice challenged those laws after Republican Secretary of State Jay Ashcroft used much of the allotted time, leaving them little opportunity to gather enough signatures to force a referendum on the 2019 abortion law.

Cole County Circuit Judge Jon Beetem struck down the laws in December, ruling that “the State may not constitutionally delay the circulation of a referendum petition for the purpose of certifying a ballot title.” The state appealed to the Supreme Court.

Attorney Jason Lewis, who argued on behalf of Republican Attorney General Eric Schmitt, defended the laws as “reasonable regulations of the referendum process.” Schmitt's office argued in court filings that the ballot title requirement “creates order and consistency, prevents voters from being confused or misled by complex bills, and promotes informed voter choices about whether to sign referendum proposals.”

But the ACLU said in court filings that there is “conflict between the Constitution, which reserves a right of referendum to the people, and the two statutes, which curtail that right.”

“The Legislature shouldn't be given the tools to narrow or broaden that right beyond what the constitution provides,” said ACLU attorney Jessie Steffan, of St. Louis.

During questioning Wednesday, Supreme Court judges Brent Powell and Patricia Breckenridge honed in on where to draw the line between reasonable and unreasonable regulations of the referendum process. They noted that based on when a bill is passed by the Legislature, opponents might have several months to gather signatures — as was the case in a successful referendum overturning a 2017 labor union law — or a matter of just weeks, as was the case with the abortion law.

The 2019 abortion law that prompted the legal fight sought to ban the procedure at eight weeks of pregnancy, except for cases of medical emergencies. It included a stairstep of other abortion bans at 14, 18, or 20 weeks should one of the earlier-term restrictions get struck down in court. It also sought to ban abortions based solely on race, sex or a diagnosis indicating Down syndrome.

The abortion law has never been enforced, because a federal judge blocked it a day before it was scheduled to take effect. The full 8th U.S. Circuit Court of Appeals heard arguments last week on an appeal of the injunction, but a ruling isn't expected for at least several weeks.