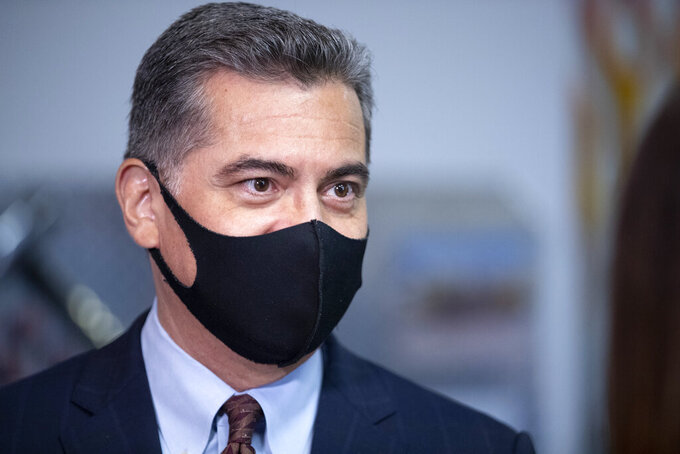 ATLANTA (AP) — A top federal health official said Monday that he understood frustration with new mask requirements, but the country could overcome them if people accepted responsibility for combatting the coronavirus.

U.S. Health and Human Services Secretary Xavier Becerra was in Georgia as COVID-19 infections and hospitalizations in the state continued to rise amid a low vaccination rate.

“I can’t tell you the depth of frustration that Americans are feeling who've done everything they can, they've done it right, to know that now we’ve got to go back to wearing masks," he said. “I don’t blame folks for asking why again on masks.”

But he added, "We have to hope that all Americans recognize it’s on us. We are responsible for not just our mothers and our families.”

He said the country could “beat” the mask requirement and spread of the delta variant of the virus, but it had to "do it together.”

The U.S. Centers for Disease Control and Prevention changed course last week and recommended that even vaccinated people return to wearing masks indoors in parts of the U.S. where the delta variant of the coronavirus is fueling infection surges. It also recommended indoor masks for all teachers, staff, students and visitors at schools nationwide, regardless of vaccination status.

At least 24 school districts in Georgia covering nearly a third of the public school population now say they will require everyone to wear a mask. Some others are trying to split the difference. Fulton County said Monday that it might require masks at some schools when class begins next Monday depending on case rates. Talbot County has ordered teachers, but not students to wear masks.

Some parents are protesting mask mandates. Dozens of opponents gathered outside the Gwinnett County school district administration building on Friday. Holly Terei, who helps run a Facebook group that coordinated the protesters, said she would withdraw her three children from Georgia’s largest school district if administrators don’t reverse the move.

The number of hospitalized patients statewide crossed above 2,400 on Monday, the highest since late February. Intensive care unit occupancy has also been trending up and was at 83% of capacity on Monday, according to state officials.

Georgia is averaging more than 3,000 positive tests a day, a steady upward climb in cases since late June. The vast majority of the new infections are among those who are unvaccinated.

The share of positive molecular tests on Monday shot above 21%, a level that experts say indicates many infections are going undetected because of a lack of testing. Monday's level is equal to the worst days for positivity in early January, just before Georgia hit its peaks for cases and hospitalizations, and could indicate a further rapid run-up in cases is on the way.

The state said in the last two weeks, infections have tripled and hospitalizations have increased by 50%. Deaths have risen by 18%, but usually lag behind when people get infected or enter the hospital.

Only 40% of Georgians are fully vaccinated, a rate that ranks in the bottom 10 of states.

Atlanta Mayor Keisha Lance Bottoms, who met with Becerra on Monday, said city officials are stressing to people “that the worst does not have to happen if they are vaccinated."

“It’s very tough when we are trying to get back to business as usual, and people are still vaccine hesitant,” she said.

Bottoms said the city was not at the point of mandating that workers get vaccinated, saying she didn't think that would be appropriate or even effective.

Becerra and Bottoms were joined by Democratic members of Congress and health leaders to discuss access to health care, including covering more Georgia residents under Medicaid.

Georgia has proposed a more limited expansion of Medicaid than other states and included a requirement that recipients work or perform a related activity. That plan was approved by the Trump administration, but the Biden White House has put it on hold.

Becerra did not provide a date for the completion of those reviews.