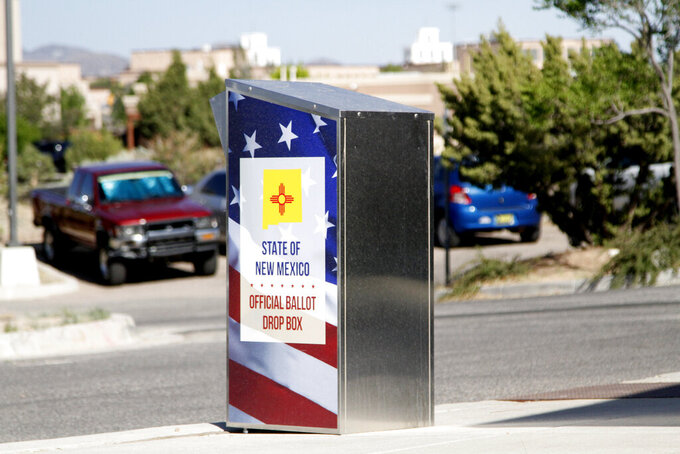 Morgan Lee, ASSOCIATED PRESS
A ballot drop box awaits deposits at an early voting center in Santa Fe, N.M., on Wednesday, June 1, 2022. Absentee and early in-person voting were underway in advance of Election Day on June 7. Democrats are deciding between two candidates for attorney general to compete in an open race in November. Five Republican candidates are pursuing the nomination for governor to take on incumbent Democratic Gov. Michelle Lujan Grisham in the November general election. (AP Photo/Morgan Lee)

Ronchetti won Tuesday's primary by a wide margin in a field of five candidates that included state Rep. Rebecca Dow, a prominent voice among Republicans in the Legislature.

The GOP nominee, joined on the victory stage by his wife and school-aged daughters, pledged to back police officers by restoring immunity from prosecution and blasted Democratic Gov. Michelle Lujan Grisham for a lengthy suspension of in-person teaching and student proficiency testing during the pandemic.

“Now our children are even further behind, and she has no plan to catch them up,” Ronchetti said. “Every at-risk child deserves to know that they have a chance with a great education.”

He added a jab at new social studies standards that increase instruction related to racial and social identity in a heavily Latino and Native American state.

“We’ll focus on teaching them reading, writing, history, science and math. One thing we won’t teach them is how to hate each other,” Ronchetti said.

New Mexico is home to 23 federally recognized Native American tribes and nations, while nearly half the population claims Hispanic ethnicity.

Separately, the Democratic nomination for attorney general went to Raúl Torrez, a second-term district attorney for Albuquerque and its outskirts. He defeated State Auditor Brian Colón to vie in an open race against Republican attorney and U.S. Marine veteran Jeremy Michael Gay of Gallup.

Torrez has pledged to expand the state’s capacity and expertise to handle consumer-rights litigation. He has criticized some provisions of judicial reforms that limit the use of money bail in decisions about pre-trial release.

New Mexico has alternated between Democratic and Republican governors since the early 1980s. An incumbent governor last lost reelection in 1994.

The November election for New Mexico governor will be a test of Democratic resolve in an oil-producing region with a strong culture of gun ownership and evolving opinions on abortion access.

The GOP in 2020 flipped a congressional district along the U.S. border with Mexico with the election of Republican U.S. Rep. Yvette Herrell, a firm defender of former President Donald Trump.

Ronchetti has pledged to deploy 150 state law enforcement personnel to the remote international border with Mexico to combat illegal migration and drug and human trafficking. The proposal echoes National Guard deployments by Republican governors in Arizona and Texas.

In a nod to his days as a TV personality, Ronchetti cracked some jokes on the victory stage. He ridiculed the governor for what he called lavish public spending at the governor’s mansion on premium beef and liquor, contrasting that with his own offer of chips, salsa and a cash bar for supporters on election night.

Republicans have faltered in a string of statewide elections, ceding control of every statewide elected office to Democrats, including the five-seat state Supreme Court.

Since taking office in 2019, Lujan Grisham and the Democratic-led Legislature have enacted reforms to ensure access to abortion, expand government oversight of guns and expand police accountability by lifting immunity from prosecution for misconduct.

In response to inflation, the state is sending out staggered payments of up to $1,500 per household between June and August.

New Mexico’s most recent Republican governor was Susana Martinez, an El Paso native with family ties in Mexico who served as a district attorney before winning an open race to succeed termed-out Gov. Bill Richardson.

In the 1st District that includes most of Albuquerque and rural communities to the south, the GOP nomination to challenge Democratic U.S. Rep. Melanie Stansbury was won by former police Detective Michelle Garcia Holmes.

Holmes ran for the same congressional seat in 2020 and was defeated by Democrat Deb Haaland, now serving as U.S. Interior secretary.

In state legislative races, state Rep. Roger Montoya of Velarde was ousted in the Democratic primary by Joseph Sanchez of Alcalde, who gave up the seat in 2020 to run unsuccessfully for Congress.

About 25% of eligible voters participated in the primary, with higher turnout among registered Republicans.