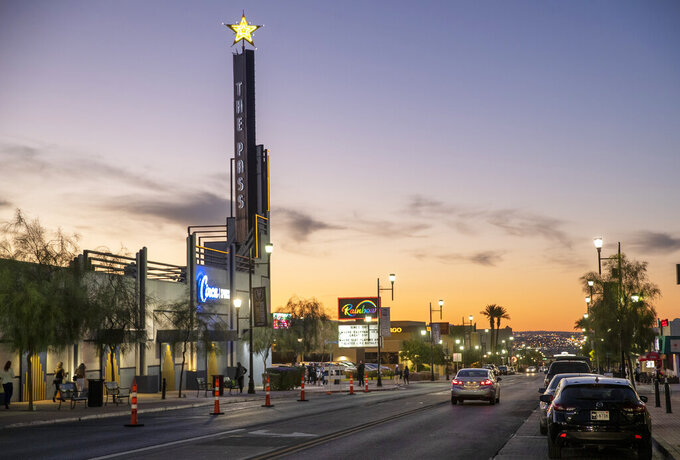 LAS VEGAS (AP) — A few weeks into setting up shop at the farmers market outside the recently renovated Henderson City Hall, Rose Nixon is seeing community form from the booth where she sells handmade soaps.

The market is one of the many hyperlocal attractions to be found on Water Street, a venerable strand of old-town Henderson that is looking optimistically into a new age.

Nixon, a one-time food and beverage manager on the Strip who now crafts soaps and sugar scrubs in her kitchen in nearby Boulder City, remembers an aging Water Street that needed a reboot. Now the area is a refreshed mix of businesses, homes and green space, and she’s seeing repeat customers already.

After a financially and socially crushing year everywhere, revitalization now flows on Henderson’s Water Street: a new ice rink and a sports bar to go with it, facelifts for two locals-friendly casinos, and events plaza, all within recent months.

Water Street was the heart of early Henderson back when the city was the company town for the Basic Magnesium Plant, providing “miracle metal” for the World War II effort. The mostly low-slung shopfronts and promenades on the lively three-quarter-mile stretch reflect its mid-century Main Street heritage.

Anything that’s been around that long will need upkeep, though.

Tim Brooks, owner and general manager of the Emerald Island and Rainbow Club casinos, said the turning point into the current renaissance came when the Henderson Convention Center was demolished in 2019 to make way for the $26 million Lifeguard Arena.

The 120,000-square-foot building, the practice facility for the Henderson Silver Knights, opened last November and is a community gathering and skating center when the Silver Knights, the minor league affiliate of the Vegas Golden Knights, aren’t on the ice. It serves as an anchor, and when it opened it got people’s attention, Brooks said.

For foot traffic, it’s a feeder to the family-friendly Sticks Tavern across the street (the pub is more literally a feeder to anyone who comes in). Sticks opened this spring and is one of about 20 places to eat or drink in the district. A sushi-tapas fusion spot Chinitas is set to open any day now. A boba tea spot is also coming soon.

For gaming and eating in one stop, there’s a tight circuit of the Rainbow Club, Emerald Island and The Pass — formerly known as Eldorado Casino. Boyd Gaming sold the Eldorado last year to smaller local operator DeSimone Gaming, who upgraded and rebranded it as The Pass in a $5 million upgrade before reopening in April.

Brooks, who bought and refreshed the 54-year-old Rainbow Club last year with his twin brother, Mike, brought in a culinary director from one of celebrity chef Emeril Lagasse’s Strip eateries.

Between dining and entertainment, if you live in east Henderson, you don’t have to devote a half-hour of freeway driving to the Strip and back for an evening out, Brooks said.

Mixed-use projects in the pipeline will also bring apartments to Water Street, alongside more restaurants, office and shop space. The one under construction closest to Lifeguard Arena, called The Watermark, is set to open in early 2022. It’s one of four parcels in the district slated to have, or available for, mixed use.

A space that once held a major sandwich shop franchise is now home to Las Vegas Kettle Corn. Brooks banters with regulars when they see him on the sidewalk. The Rainbow Club is new to his portfolio but he and his brother have owned the Emerald Island property for 20 years, and Brooks has lived in Henderson since 1998.

The city, which maintains its headquarters on Water Street next to the arena, deemed Water Street as a redevelopment district along with the greater downtown area in 1995. It’s one of five targeted “mature” areas that the city focuses on for reinvestment to attract businesses and keep property values up. (As a property owner itself, the city unveiled a renovated plaza this spring with an amphitheater, splash pad, playground and jumbo video screen.)

Though the area recently opened some high-profile attractions, the preparation had been underway for decades, said Tiffany Reardon, who works in the city’s redevelopment office. The city upgraded the street’s infrastructure during the Great Recession.

“We like to call it a 30-year overnight success,” Reardon said.