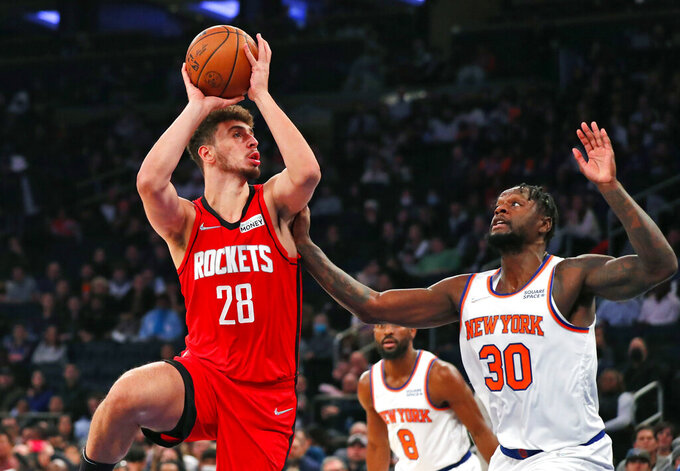 NEW YORK (AP) — Alec Burks scored 17 of his 20 points in the fourth quarter, Evan Fournier added 19 and the New York Knicks handed the Houston Rockets their 14th consecutive loss with a 106-99 victory on Saturday.

The reserve guard hit five of his career-high six 3-pointers and recorded four of his five steals in the last period.

“I was just trying to make winning plays and it just happened like that. Shots went in,” Burks said.

One of his steals led to Obi Toppin's dunk and then he picked off another bad pass and converted it into a 3-pointer that briefly gave the Knicks the lead.

“I just tried to play physical. I was trying to be aggressive,” Burks said.

All-Star Julius Randle had 16 points and 10 rebounds, while Immanuel Quickley chipped in 13 points off the bench for the Knicks.

New York improved to 9-7 despite struggling against against one of the league’s worst teams for the second straight outing.

“I liked the way we fought, the way we found a way to win in the end,” Knicks coach Tom Thibodeau said. “It wasn’t a smooth game.”

“That’s just a team learning, growing and fighting to the point where we got to five minutes and we had an opportunity and it hasn’t been like that,” Houston coach Stephen Silas said. “So I am proud of our guys. We just got to finish.”

Jae’Sean Tate finished with 11 points and 10 rebounds for Houston, which dropped to 0-10 in road games.

Houston led 89-84 midway through the fourth quarter but Burks hit three 3-pointers down the stretch.

Randle found Burks for a 3-pointer to even it at 89-all, but Eric Gordon gave the Rockets the lead momentarily with a driving layup.

Eric Gordon's free throw and Jalen Green's layup cut the deficit to five points, but a pair of free throws from Quickley increased the Knicks' lead to 103-96.

Houston turned the ball over eight times during the first nine minutes. But the Rockets settled down, outscoring New York 10-2 to take a 21-13 at the end of the opening period.

“We were playing hard,” Wood said. “Everybody’s heart was in the right place. The ball was moving. Everybody was cheering for one another. We just got to keep up that same energy.”

The Knicks started out sluggish, too, shooting just 5 for 23 in their worst opening quarter of the season.

Rockets: G Kevin Porter Jr. missed the game with a left thigh contusion. … Green, the second overall pick in the 2021 draft, had 16 points … Houston had a season-high 22 turnovers.

Knicks: C Taj Gibson (groin) was held out. … C Nerlens Noel returned after missing the last four games because of a sore right knee. Prior to Saturday, Noel had only played in four of New York’s 14 games, last doing so Nov. 8 at Philadelphia. … Thibodeau said it will be up to G Kemba Walker whether he plays the second game of a back-to-back Sunday in Chicago.

Rockets: Wrap up their four-game road trip in Boston on Monday night.

Knicks: On Sunday will visit the Chicago Bulls, who they beat 104-103 in their first meeting of the season Oct. 28.