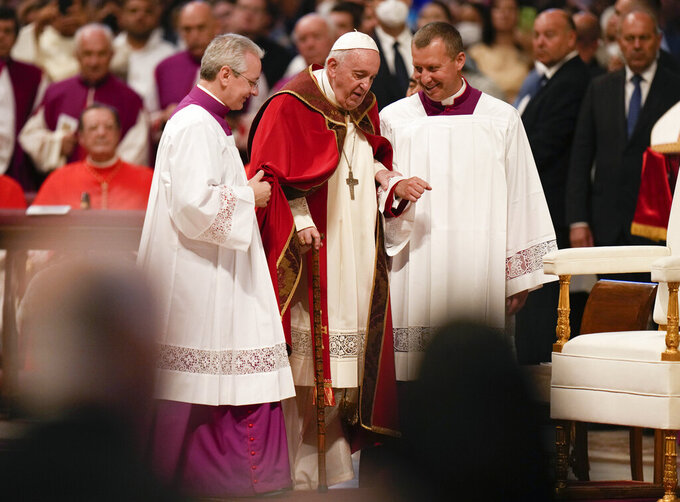 ROME (AP) — Pope Francis urged the people and leaders of Congo and South Sudan on Saturday to “turn a page” and forge new paths of reconciliation, peace and development.

Francis issued a video message on the day he had planned to begin a weeklong pilgrimage to the two African countries. He canceled the scheduled trip last month because of knee pain that makes walking and standing difficult.

In the message, Francis said he was “greatly disappointed” to not be able to travel and promised to visit “as soon as possible.”

He urged the people of both countries not to allow themselves to be robbed of hope despite the violence, political instability, exploitation and poverty that he said had pained them for so long.

“You have a great mission, all of you, beginning with your political leaders: It is that of turning a page in order to blaze new trails, new paths of reconciliation and forgiveness, of serene coexistence and of development,” Francis said.

“For their sake, above all, it is necessary to lay down arms, to overcome all resentment, and to write new pages of fraternity,” the pope said.

He was joined in issuing separate video messages by the Archbishop of Canterbury, Justin Welby, and the moderator of the Church of Scotland, Right Rev. Dr. Iain Greenshields, who were supposed to have accompanied Francis on the South Sudan leg of the trip. In their messages, they expressed disappointment that the visit had to be postponed but urged South Sudanese to nevertheless keep working for peace.

“Peace requires much more than not being at war. It must be created together, with your fellow leaders and even with your enemies,” Welby said in his message. Greenshields urged the South Sudanese to “give expression to Jesus’ words that ‘Blessed are the peacemakers for they will be called the children of God.’”

While Francis was unable to travel, he is due to celebrate a special Mass at St. Peter’s on Sunday for Rome’s Congolese community. He sent his No. 2, Cardinal Pietro Parolin, to visit both Congo and South Sudan on the days he was supposed to have been there.

The Catholic Church has always played a role in Congo, especially in the establishment of democracy and advocacy for human rights. The church deployed about 40,000 electoral observers in the 2019 election that brought Felix Tshisekedi to the presidency. Tshisekedi, an opposition figure, defeated then President Joseph Kabila’s chosen candidate in what was Congo’s first peaceful, democratic transfer of power since independence from Belgium in 1960.

There were high hopes for peace and stability once South Sudan gained its long-fought independence from Sudan. But it slid into ethnic violence in December 2013. A 2018 peace deal that binds President Salva Kiir and his deputy, Riek Machar, in a unity government encourages authorities to hold elections before February 2023.