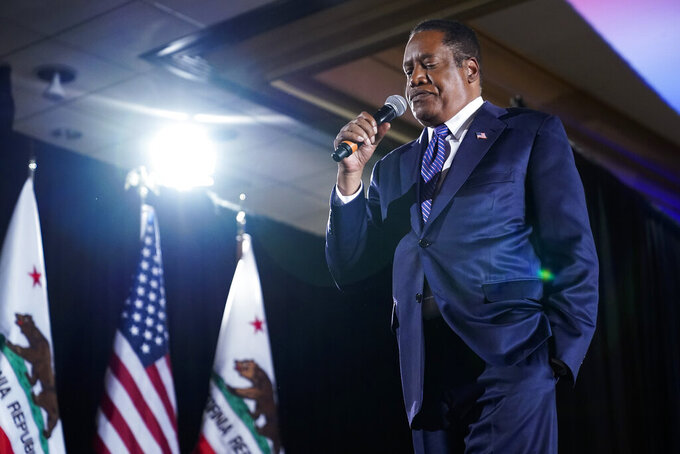 SACRAMENTO, Calif. (AP) — Few Democrats were surprised to see Democratic Gov. Gavin Newsom swat down a Republican-driven recall campaign in bright-blue California. But they were pleased with how he did it.

By making the race into a referendum on former President Donald Trump and his supporters' “extreme” resistance to coronavirus precautions, Newsom offered a formula for survival that could translate to dozens of races in next year's midterm elections, Democrats said. A healthy turnout, spurred by some late anxiety, showed Democrats remain eager to vote against the former president, even when he's not on the ballot.

Republicans said they saw nothing to worry about in the California results. Losing badly in a liberal stronghold isn't much of a prediction of the party's performance in battlegrounds like Florida or Georgia, they said. They argue they were saddled with a flawed candidate — talk radio host Larry Elder, the Republican frontrunner whom Democrats likened to a Trump clone in a state the former president lost by 30 percentage points and did little to appeal to moderate voters in swingy suburbs.

But President Joe Biden and his party won’t have it as easy next year as Newsom did, said Ron Nehring, a former chairman of the California Republican Party who was harshly critical of Elder and worked for one of his rivals

“Gavin Newsom had one opponent who he was able to define in the minds of enough swing voters,” he said. "No. 1, Biden himself is not going to be on the ballot and No. 2, he does not have a singular opponent.”

On Wednesday, Biden embraced Newsom's victory and his message. “This vote is a resounding win for the approach that he and I share to beating the pandemic: strong vaccine requirements, strong steps to reopen schools safely, and strong plans to distribute real medicines — not fake treatments — to help those who get sick,” Biden said in a statement.

But there will be better test cases coming on how these messages play with voters. In November, voters in Virginia will choose between Democrat Terry McAuliffe, a former governor and longtime Democratic operative, and GOP businessman Glenn Youngkin. McAuliffe has been hammering Youngkin as too extreme for a state that has been growing more diverse, more suburban and more Democratic for years.

California has similar demographic trends at play. In Orange County, long a GOP bastion, racial and ethnic diversity and the growing distaste higher-educated, wealthy voters have shown for Trump have opened the door to Democrats in the county — although the GOP won back two House seats there last year.

The recall was failing in Orange County by 5 percentage points on Wednesday, although the vote count in California will go on for weeks and the final margins may change. Newsom and his Republican opponent John Cox essentially tied in the county in 2018.

Even the incomplete the results buoyed Democrats.

“We’re pretty excited about California, and it’s not because we thought we’re going to lose it — it’s because the margin is better than expected and it shows the Republican message is failing badly in swing districts," Mahoney said.

Still, it's hard to draw too many conclusions from a single election in a state so liberal that Democrats held every statewide office even during Republican wave years of 2010 and 2014.

“It’s like us boasting about beating a recall in Alabama,” quipped Matt Gorman, a former strategist with the National Republican Congressional Committee.

Gorman said Democrats would only get so much mileage out of demonizing Republican nominees and trying to tie them to Trump. “Biden is the focus” of the midterms, Gorman said, noting how Republicans unsuccessfully tried to tie congressional Democrats to Nancy Pelosi in 2018, when she was only minority leader and didn’t control the House of Representatives. “It becomes less effective once they’re out of power.”

“If inflation is high, gas prices are high and COVID is spiking, it’s going to be much harder” for Democrats to talk about Trump and Republican extremism in 2022, Gorman said.

It will also be hard for Republicans not to talk about Trump. GOP primaries for Senate seats in Ohio, Georgia and Pennsylvania already are poised to be a competition for Trump's base. House candidates have been clamoring for Trump's endorsement. The former president hasn't been shy about anointing favorites.

Democrats are certain to use that against those candidates when they face a general election.

“I think a sad reality of the modern GOP is that there are going to be a lot of Larry Elders on the ballot in 2022 because they’re going to win Republican primaries,” said Addisu Demissie, a Newsom campaign strategist. “When the alternative is extreme, you represent not just your base but the middle.”