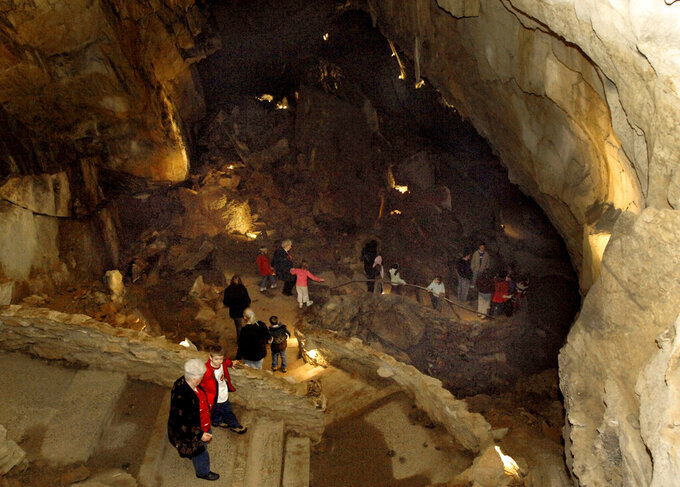 Uncredited, ASSOCIATED PRESS
In this Jan. 27, 2006, photo, people visit inside the Bristol Caverns in Bristol, Tenn. The caverns are for sale for $4.5 million. (Bristol Herald Courier via AP)

BRISTOL, Tenn. (AP) — Gary Barnett showed up with a flashlight at age 15.

The year was 1962. President John F. Kennedy was in the White House.

At that time, Bristol Caverns had been officially open for less than 20 years.

Barnett fell in love with the caverns, where he worked as a tour guide.

This tourist attraction was not far from where the Barnett family lived in the Holston Valley of Sullivan County.

“It was a whole lot better than flipping hamburgers,” Barnett said of his job.

He worked there for about five years in the 1960s.

Yet he kept coming back and helping the Hatcher family that owned the caverns.

In 1981, Barnett bought Bristol Caverns with his father, Harold Barnett, and two brothers, Tom and Charles.

Barnett wanted to preserve and protect the cave.

Today, he’s looking at selling the business. And it’s emotionally tough to say goodbye, he said.

Over the decades, Barnett has loved being able to show the cave to the public, he said.

“It’s like a different world in there. Just being able to share it, it’s one of God’s creations,” he said.

The attraction went up for sale about a week ago for $4.5 million through Southeastern Properties, based in Bristol, Virginia.

“There have been some offers already — or some people of interest,” Barnett said.

“Most of your caverns in the country are privately owned,” he said. “A few of them are owned by the government.”

Tennessee is home to The Lost Sea, Ruby Falls, Tuckaleechee Caverns, Appalachian Caverns and Forbidden Caverns — to name a few.

“You don’t have one around every corner,” said Barnett, 74.

In all, there are 10,000 caves in Tennessee. Of those, just 10 or fewer are open for commercial tours, according to Barnett.

Drop-in tourist business has remained steady. But COVID-19 took out the school field trips for the past year and a half, Barnett said.

“That hurt. But it seemed like our tourist trade picked back up,” he said. “We lost all of our school groups because of the COVID.”

So far this year, he said, “We’ve been running ahead. So it’s pretty good this year. Our sales have been up.”

“We’re only showing about a third of it,” Barnett said.

What looks like a frozen waterfall called “Bridal Veil” is the most popular attraction — and the trademark showpiece, Barnett said.

It’s been the scene of several weddings.

The Bridal Veil is a dripstone formation that measures about 8 feet around the top and about 35 feet in length, Barnett said. “It looks like a waterfall. We actually call it our frozen waterfall.”

Beyond the Bridal Veil awaits a mix of stalagmites, stalactites, soda straws and columns. It’s mainly calcium deposits “with a lot of various minerals mixed with them to give them the colors and various formations,” Barnett said.

“The cave itself is amazing to see. But what made it so special is the Barnett family,” said longtime Bristol Caverns tour guide Matt Tester, 34, of Bluff City, Tennessee.

Barnett sighed and added, “It’s part of us.”