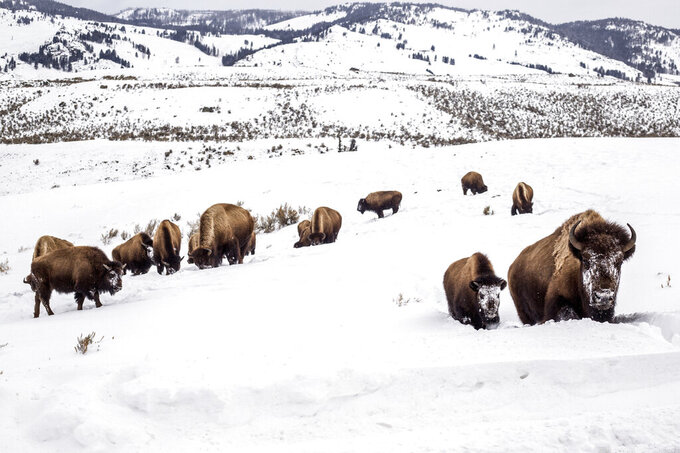 Ryan Dorgan, ASSOCIATED PRESS
FILE - A mother bison leads her calf through deep snow toward a road in Yellowstone National Park, Wyoming, on Feb. 20, 2021. The U.S. Fish and Wildlife Service announced Friday, June 3, 2022, that it will undertake a comprehensive study over whether Yellowstone bison should be protected under the Endangered Species Act. (Ryan Dorgan/Jackson Hole News & Guide via AP, File)

HELENA, Mont. (AP) — A wildlife agency that lost key court rulings over its denial of petitions to protect Yellowstone National Park bison will undertake a comprehensive study over whether the animals should be covered under the Endangered Species Act, the U.S. Fish and Wildlife Service said Friday.

The decision follows a federal court ruling in January that ordered the U.S. Fish and Wildlife Service to review its 2019 denial of petitions seeking the extra protections. U.S. District Court Judge Randolf Moss of Washington, D.C., said the agency did not give a reason for its decision to rely on some scientific studies while rejecting others.

The January ruling was the second time a federal judge said the agency wrongly denied petitions seeking to have Yellowstone bison listed as threatened or endangered.

Under findings that are scheduled to be published in the Federal Register on Monday, the U.S. Fish and Wildlife Service said the petitions — first filed in 2014 — present substantial, credible information that the sought-after protections may be needed based on reductions of the animal's range, the lack of tolerance to bison outside the park, and loss of habitat and genetic diversity.

The agency will now carry out a year-long review to determine whether protections are necessary, the draft notification said. The agency is asking for people to submit any new information concerning the status of, or threats to, Yellowstone bison or its habitat to be considered during the review.

Bison in and around Yellowstone National Park are managed under a federal-state agreement to maintain wild bison while preventing the spread of brucellosis — a bacterial infection that can cause animals to abort their young — to cattle in Montana. The Interagency Bison Management Plan calls for capturing bison, testing them for brucellosis and sending some to slaughter when they leave the park. Bison can also be hunted outside the park.

Buffalo Field Campaign and the Western Watersheds Project have been fighting to have Yellowstone's bison declared endangered or threatened based, in part, on studies that show the park has two genetically distinct herds of bison.