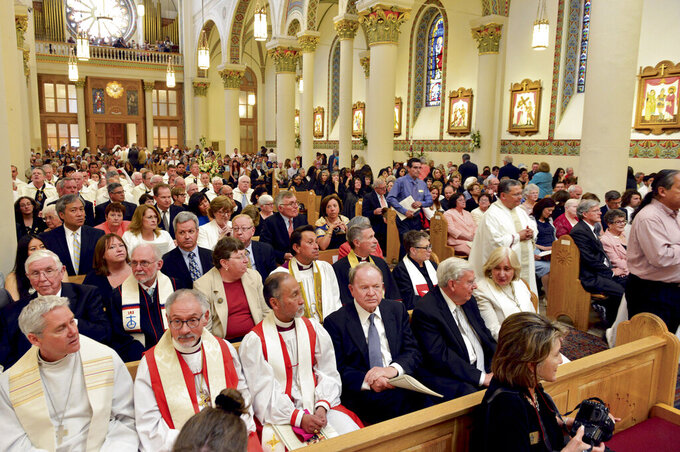 Clyde Mueller, ASSOCIATED PRESS
FILE - Attendees fill the Cathedral Basilica of St. Francis of Assisi in Santa Fe, N.M., during a Mass of Installation for the Rev. John C. Wester as the new archbishop of Santa Fe on June 4, 2015. Archbishop Wester is speaking about the decision to mortgage the iconic Santa Fe cathedral to meet a settlement agreement tied to church sex abuse victims. The archbishop sent letters to parishes last month informing them they would collectively need to borrow $12 million to pay for the settlements. (Clyde Mueller/Santa Fe New Mexican via AP, File)

The action was a last resort because “we pretty much sold everything we can, including my residency," Wester told the Santa Fe New Mexican on Thursday.

The archbishop sent letters to parishes last month informing them they would collectively need to borrow $12 million to pay for the settlements. That's when he broke the news about the cathedral. The archdiocese has to remit $65 million by Sept. 30 and a final $10 million by March 31 of next year, Wester wrote.

Still, the decision to use the Cathedral Basilica of St. Francis of Assisi, the heart of the diocese, shocked many New Mexico Catholics. Wester believes the love for the cathedral actually was a factor in the property being accepted as collateral.

“I’m not a lender, but I would imagine that they would see that as a good thing because obviously the archdiocese is going to do everything in its power to make good on our debt,” Wester said.

The Archdiocese of Santa Fe filed a Chapter 11 bankruptcy case seeking protection from creditors in 2018 as sex abuse claims surged.

The chairman of a creditors committee negotiated an agreement on behalf of surviving victims and a tentative deal was reached in May.

It also includes a non-monetary agreement with the Archdiocese to create a public archive of documents regarding the history of the sexual abuse claims.

In New Mexico, some 74 priests have been deemed “credibly accused” of sexually assaulting children while assigned to parishes and schools by the Archdiocese, which covers central and northern New Mexico.

Established in the 1850s after the Mexican-American War, the Archdiocese of Santa Fe is one of the oldest in the nation. Wester has been the archbishop there since 2015.

While it was a tough decision to put up the cathedral, Wester said it was ultimately the right one.

“If you think about it, by mortgaging the cathedral we’ll have fewer churches, if any, that we have to mortgage, so it’s really mostly a practical thing,” he said.