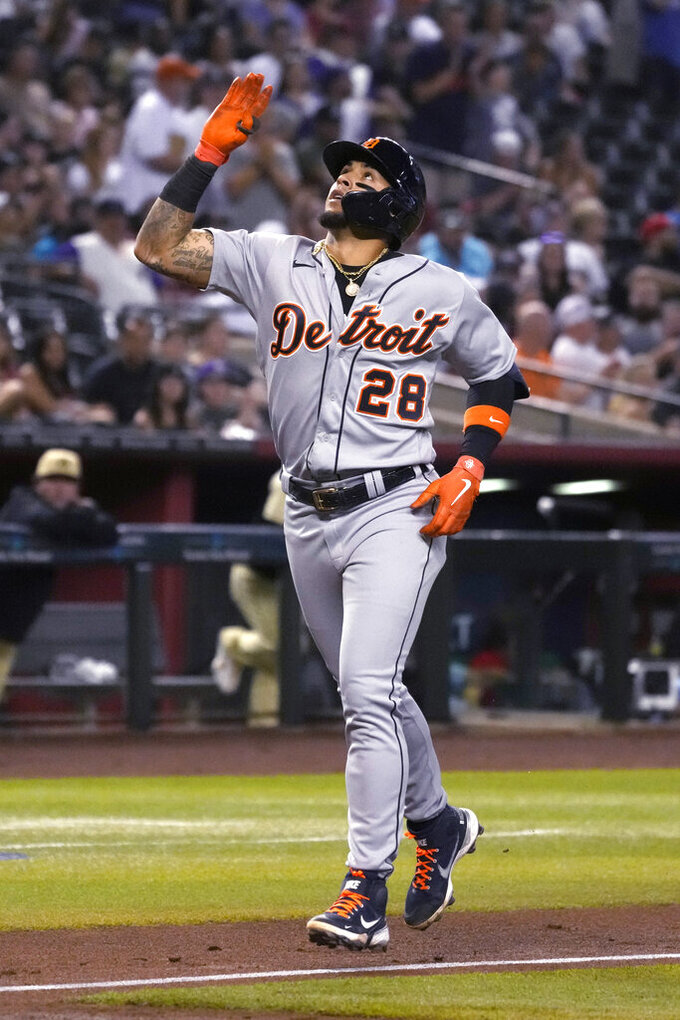 PHOENIX (AP) — An Arizona fan in the front row talked trash to Javier Báez as he stood in the on-deck circle. He kept it going as the Detroit shortstop stepped to the plate.

Báez hit a grand slam to quiet a heckler in the front row and homer for the third straight game, lifting the Tigers to a 5-1 win over the Arizona Diamondbacks on Friday night.

“Javi doesn’t need a lot of motivation,” Tigers manager A.J. Hinch said. “Javi loves the moment and that was another big one for him — and I think he let the fan know it.”

Báez homered in consecutive games against Boston and launched his seventh career grand slam off Merrill Kelly (6-5) in the third inning of Detroit's first game in Arizona since 2017.

Báez didn't watch as the ball sailed deep into the left field seats, turning instead to emphatically drop his bat while looking at the fan in the front . He circled the bases and, after high-fiving teammates, pointed to the fan before putting a shushing finger to his lips

“It was nothing bad, we were just talking trash,” Báez said. “I turned back laughing, so just competition stuff. As soon as I hit that ball, the first thing came to my mind was all this stuff that he was saying. So yeah, it was just very fun.”

Báez joins Carlos Guillen (2007) and Dick McAuliffe (1966) as the only Tigers shortstops to homer in three straight games. The 459-foot shot was the longest by a Detroit player since Jeimer Candelario hit one 467 feet on July 15, 2019.

Rony Garcia (2-2) overcame some early wildness to allow a run — on Josh Rojas' sacrifice fly in the fourth — on three hits in 5 1/3 innings.

Arizona, baseball's second-worst hitting team, had another rough night at the plate.

The Diamondbacks failed to take advantage of Garcia's early control problems and finished with three hits to lose for the fifth time in six games.

“It didn’t go anywhere close to where we wanted it to,” Diamondbacks manager Torey Lovullo said. “We’ve got to figure it out.”

Alex Lange came in from the bullpen after Garcia issued a one-out walk in the sixth inning. The right-hander opened with six straight balls, sending Tigers pitching coach Chris Fetter out to the mound.

Lange struck out David Peralta and got Rojas to ground out, getting a pat and some words of encouragement from first baseman Spencer Torkelson as he walked off.

“Fet can notice things from the side so quickly and that's why we want to save our mound visits until we really need it," Hinch said. “He goes out and makes a subtle little either mechanical or mental adjustment, and he’s really good at it.”

Tigers: OF Austin Meadows cleared COVID-19 protocols and is expected to rehab with Triple-A Toledo soon.

Diamondbacks: LF David Peralta went 1 for 3 after missing three games with lower back tightness. ... 2B Buddy Kennedy struck out looking as a pinch hitter in the ninth inning after leaving Tuesday's game against San Diego with left wrist pain.