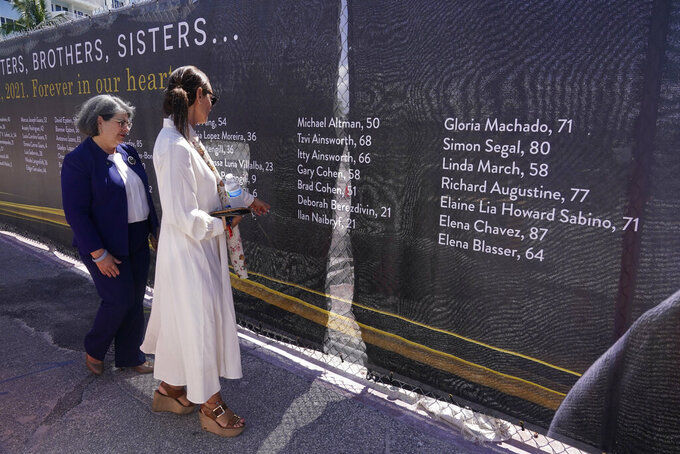 Marta Lavandier, ASSOCIATED PRESS
Ronit Naibryf, right, shows Miami-Dade County Mayor Daniella Levina Cava, the name of her son Ilan Naibryf, Thursday, May 12, 2022, in Surfside, Fla. A large banner with the names of the 98 people killed in the collapse of the Champlain Towers South condominium nearly a year ago, was installed around the site. (AP Photo/Marta Lavandier)

Homeowners with condos in the Florida building that collapsed and killed 98 people nearly a year ago but whose families suffered no loss of life will share at least $96 million from a court settlement, a judge said Tuesday.

That is in addition to the payout of about $1 billion to be shared by families of the victims of the June 24 collapse of the Champlain Towers South building in Surfside. Additional fees for lawyers will be settled later.

The initial amount for property owners was previously set at $83 million, but Circuit Judge Michael Hanzman in Miami agreed at a hearing Tuesday that the higher amount was proper for 136 condo owners in the 12-story building.

“What I care about now is finishing this case and getting money into the hands of victims,” Hanzman said, noting that under Florida law, the condo owners could have been assessed a lot of money to pay for the loss of the building.

“This is an outstanding result for the property owners,” the judge said.

Meanwhile, lawmakers in Tallahassee introduced legislation Tuesday in response to the tragedy that would tighten building safety rules by requiring all condominiums higher than three stories statewide to have periodic inspections of their structural integrity. The issue was added to a special Legislative session called to address rising property insurance rates.

Legislative leaders were in agreement over requiring inspections and recertification of the buildings after 30 years, or 25 years if the building is within 3 miles (5 kilometers) of the coast, and every 10 years thereafter.

When the Champlain Towers South collapse last June, it was 40 years old and undergoing what was then a 40-year-recertification process required by Miami-Dade County.

The exact details of the lawsuit settlement over loss of life are to be done by Friday, followed by a hearing for any objections. A billionaire developer from Dubai is set to purchase the 1.8-acre (1-hectare) beachside site for $120 million.

An auction for the property initially was set for Tuesday, but no other parties countered the bid by Hussain Sajwani, of DAMAC Properties, before a deadline last Friday.

Attorney Harley Tropin, who represents plaintiffs in the case, said the final settlement for deaths in the condo building’s collapse has grown to more than $1 billion, an increase from the $997 million announced in court earlier.

The money comes from several sources, ranging from insurance companies to engineering companies to the luxury condominium next door that was part of the lawsuit. None of the parties are admitting wrongdoing. The details on who is paying exactly what into the settlements have yet to be determined.

The twin settlements are still in the works but Hanzman said the case should be settled by September, so that victim families and property owners know what to expect. This would still be an unusually quick settlement for a case of this magnitude, lawyers said.

“One of the benefits of a settlement is finality," the judge said.

Most of the building collapsed suddenly around 1:20 a.m. last June 24 as most of its residents slept. Only three people survived the initial collapse.

No other survivors were found despite the around-the-clock efforts of rescuers who dug through a 40-foot (12-meter) pile of rubble for two weeks. Another three dozen people were in the portion of the building that remained standing, but was ultimately demolished.

The National Institute of Standards and Technology is investigating the cause of the collapse, a process that is expected to take years.

In the court case, Judge Hanzman set a noon Friday deadline for a final settlement agreement to be filed. If that does not happen, the judge said he would hold a full hearing on why a final deal has not been reached.

“At some point, this plane has to come in for a landing,” Hanzman said.

The collapse drew new scrutiny to high-rise safety statewide, especially in vulnerable coastal areas. At the time, Miami Dade and neighboring Broward counties were the only ones of Florida’s 67 counties with a building recertification process. The new legislation would broaden those certifications statewide, as well as require them significantly earlier in the building’s lifespan.

Earlier legislation proposing a statewide inspection and recertification regimen failed during the regular legislative session that ended in March.

The new measure would require condominium associations to provide inspection reports to owners, and if structural repairs are needed, work must begin within a year of the report.