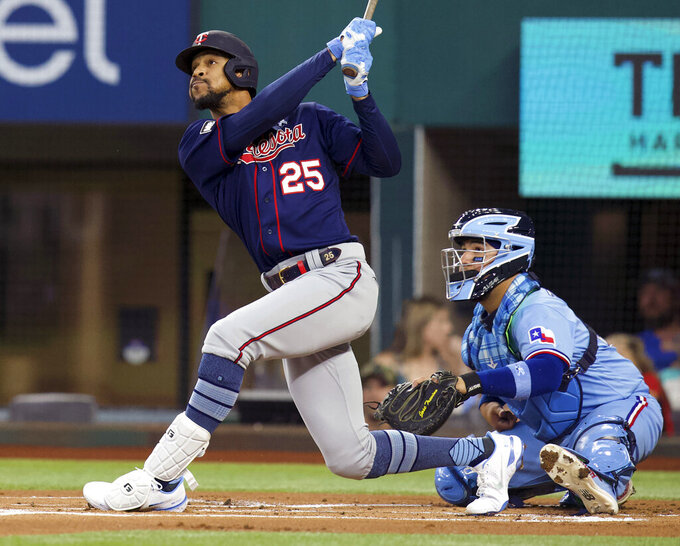 Richard W. Rodriguez, ASSOCIATED PRESS
FILE - In this June 20, 2021, file photo, Minnesota Twins Byron Buxton (25) hits a home run in the first inning against the Texas Rangers during a baseball game in Arlington, Texas. Buxton does not have a new contract yet. He does not have a target return date from his current injury, either. The Twins center fielder says he still has a strong desire to remain with the organization, however. (AP Photo/Richard W. Rodriguez, File)

The Minnesota Twins center fielder still has a strong desire to remain with the organization, however, despite his eligibility for free agency following next season.

Buxton said Monday that negotiations on an extension were still open, even though his agent rejected the latest offer from the team last week.

“Everybody knows I want to be here. It’s just one of those things. We didn’t come to an agreement, but it’s not the first time it’s happened. We’ve been in numerous conversations before, and it’s not the end. You never know how many more chances they have to communicate with each other,” Buxton said. "I’m here with the Twins. I’m under contract with the Twins next year, and hopefully I’m with the Twins to end my career. It’s unfortunate at the moment.”

Buxton has missed the last five weeks with a broken left pinky finger after being hit by a pitch there, the most recent bout of bad luck that has dogged him and the Twins during his career that started as the second overall pick in the 2012 draft. He missed 39 games with a strained right hip prior to that, with only three days between injured list stays.

For a player who has appeared in more than 92 games only once in seven major league seasons, avoiding frustration about the business side of baseball is undoubtedly easier.

“For me, it’s more about me getting back out here to compete with my teammates and get back in the groove of playing again. Obviously, I’ve been out a while, so it’s not really my main focus right now,” Buxton said.

The two sides have talked about an extension for awhile. The Athletic, citing unnamed sources, reported Sunday that Buxton's camp declined an $80 million counter-offer from the Twins over seven years. His injury history has made establishment of his market value difficult to define. Buxton, for his part, did not appear uncomfortable when asked about the contract situation in a pregame interview with reporters.

“Everybody is on good terms. I’m great here. Happy to be here,” Buxton said, adding: "My representatives know I want to be here, so they take that into account. So I don’t really have to say too much else because they know where I want to be.”

Buxton has been playing catch with teammates, wearing a soft protective sleeve on his hand, but not much beyond that.

“I’ve been able to come to the ballpark and realize each day’s a blessing. I’m grateful to be here. It made me cherish that moment a little bit better, to want to get back even more,” he said.

Whenever he returns, the disappointing Twins could look a lot different. They've already dealt designated hitter Nelson Cruz, and the trade deadline is four days away.

“You may feel some of that just because we’ve already had a trade go down, and a trade that had to do with one of our guys that meant a lot to our group and has been here and has been an important figure for us,” manager Rocco Baldelli said. “It kind of feels like something may happen or it could happen, but the truth is, honestly, you never know, and to react in any way before something goes down is truly taking us away from what we’re trying to do.”