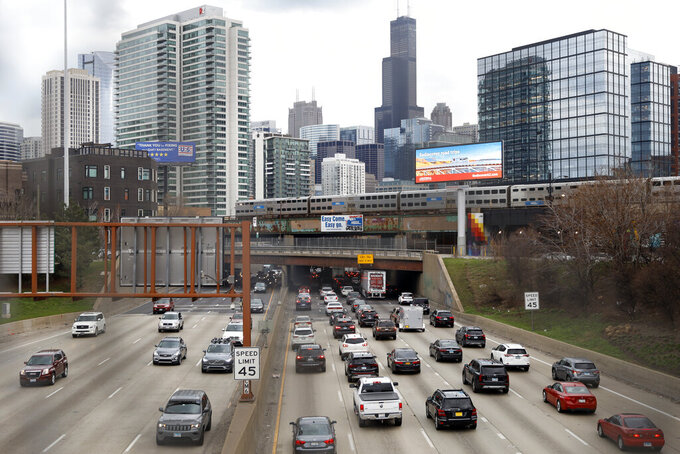 WASHINGTON (AP) — With upcoming data showing traffic deaths soaring, the Biden administration is steering $5 billion in federal aid to cities and localities to address the growing crisis by slowing down cars, carving out bike paths and wider sidewalks and nudging commuters to public transit.

Transportation Secretary Pete Buttigieg on Monday announced the availability of money over five years under his department's new Safe Streets & Roads for All program.

The aim will be to provide a direct infusion of federal cash to communities that pledge to promote safety for the multiple users of a roadway, particularly pedestrians and bicyclists, as well as motorists.

Federal data being released this week by the Transportation Department is expected to show another big jump in U.S. traffic deaths through 2021, reflecting continued risky driving that began with the coronavirus pandemic in March 2020. Fatalities among pedestrians and cyclists have been rising faster than those within vehicles.

Deaths also are disproportionately higher among nonwhite, lower-income people, who are more likely to take public transit and travel by foot or bike, as well as those in tribal and rural areas, where speeding can be common and seat belt use less frequent.

“We face a national crisis of fatalities and serious injuries on our roadways, and these tragedies are preventable — so as a nation we must work urgently and collaboratively to save lives,” Buttigieg said. He said the money “will help communities large and small take action to protect all Americans on our roads.”

“We have become far too accustomed to the loss of life and serious injuries happening on our roadways," he said.

Previewing the upcoming data, Steven Cliff, the acting head of the National Highway Traffic Safety Administration, told an event last week the final figures would show “alarming" increases for the full year of 2021.

Roadway deaths represent about 95% of all U.S. transportation deaths, at more than 38,000 in 2020. In 2021, data released so far has already shown U.S. traffic fatalities rising to 31,720 through the third quarter, the highest nine-month period since 2006. Before 2020, the number of U.S. traffic deaths had fallen for three straight years.

Cliff said a big chunk of fatalities have been occurring for motorists who do not buckle up and often during short car trips “down the street.”

The department's effort is part of a new national strategy, launched in January, to stem record increases in road fatalities with a “safe system” approach that promotes better road design, lower speed limits and tougher car safety regulations. About $5 million to $6 million for the grants is included in President Joe Biden’s infrastructure law.

Still, much of the federal roadmap relies on cooperation from cities and states, and it could take months if not years to fully implement with discernible results — too late to soothe 2022 midterm voters unsettled by this and other pandemic-related ills, such as rising crime.

The latest U.S. guidance Monday invites cities and localities to sketch out safety plans in their applications for the federal grants, which are to be awarded late this year.

It cites examples of good projects as those that promise to transform a high-crash roadway, such as by adding rumble strips to slow cars or installing speed cameras, which the department says could provide more equitable enforcement than police traffic stops; flashing beacons for pedestrian crosswalks; new “safe routes” via sidewalks or other protected pathways to school or public transit in underserved communities; and other “quick build” roadway changes designed with community input.

Buttigieg was traveling to Germany on Monday for the International Transport Forum to discuss the best approaches to achieve a U.N. goal of halving the world’s traffic deaths by 2030. Around 1.25 million people are killed worldwide on the road each year. The U.S. has been mostly an outlier in seeing traffic deaths climb during the pandemic even with fewer cars on the road, due in part to higher U.S. rates of speeding and not wearing seatbelts.

Michael Kelley, policy director for roadway safety advocacy group BikeWalkKC in Kansas City, Missouri, says he has been advocating for biking and walking routes because his two young daughters love to explore outside but can't do so safely since their neighborhood lacks sidewalks and sits near a highway.

Kelley, who is Black, said communities can become vibrant and more connected by fostering walkable neighborhoods that allow the elderly who may not readily drive, such as his parents, to “age in place” near a younger generation, like his daughters, who increasingly “don’t want or need to drive” a car if there are other safe and affordable transportation options available.

“Everyone deserves to be able to walk, to bike, to take transit, and for that to be the safe and easy choice,” Kelley said.

“I’m convinced that we can use this moment, this urgent and troubling moment, as a pivot point,” he said. “We are out to fund whatever is going to go most directly toward reducing crashes and saving lives so we can change the trajectory of road safety in this decade.”