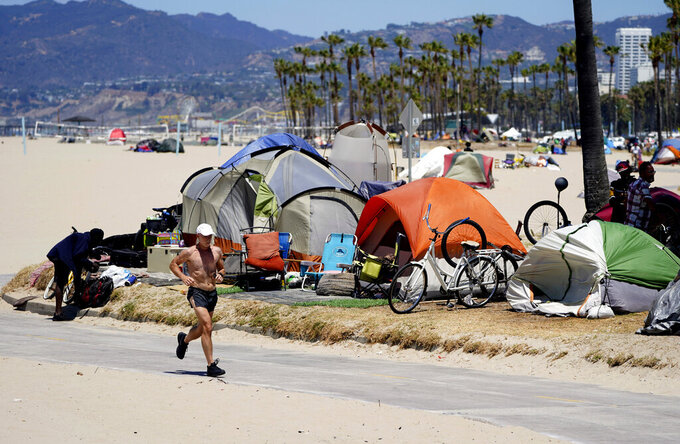 Marcio Jose Sanchez, ASSOCIATED PRESS
FILE - In this June 8, 2021, file photo, a jogger runs past a homeless encampment in the Venice Beach section of Los Angeles. California Gov. Newsom on Thursday, Sept 16, 2021, approved two measures to slice through local zoning ordinances as the most populous state struggles with soaring home prices, an affordable housing shortage and stubborn homelessness. Newson signed the most prominent legislation despite nearly 250 cities objecting that it will, by design, undermine local planning and control. (AP Photo/Marcio Jose Sanchez, File)

He signed the most prominent legislation despite nearly 250 cities objecting that it will, by design, undermine local planning and control.

The outcome marks the latest battle between what's come to be thought of as NIMBY vs. YIMBY. While most agree there is an affordable housing shortage, proposed construction often runs into “not in my backyard” opposition.

“The housing affordability crisis is undermining the California Dream for families across the state, and threatens our long-term growth and prosperity,” Newsom said in announcing his approval. “Making a meaningful impact on this crisis will take bold investments, strong collaboration ... and political courage from our leaders and communities to do the right thing and build housing for all.”

He also announced the state will put $1.75 billion into what his administration is calling a new California Housing Accelerator, which he said will speed building 6,500 affordable multi-family units that had been stalled for lack of tax-exempt bonds and low-income housing tax credits.

It's part of $22 billion that the state plans to spend to spur new housing and ease homelessness along with the new laws.

“For too many Californians, the idea of owning a home, renting a house big enough for their family, or even just being able to live in the community where they work is a far-off dream," Atkins said. “This law will help close the gap and make those dreams a reality.”

The bill includes ways local governments can block construction that might harm public safety or public health or benefit housing speculators. Property owners seeking to split a lot would have to swear that they plan to have one of the housing units as their principal residence for at least three years.

That's not enough to keep from undercutting local control, 241 cities joined by the League of California Cities said in a letter to Newsom, though they acknowledged that affordability and homelessness “are among the most critical issues facing California cities.”

The new law “undermines the ability of local governments to responsibly plan for the types of housing that communities need, circumvents the local government review process, and silences community voices,” said league executive director Carolyn Coleman, noting that there are no provisions requiring that the new housing be affordable.

Newsom has made fighting homelessness a centerpiece of his administration and said he was spurred to even more urgency by a recall election that threatened to unseat him in midterm. He survived when nearly two-thirds of voters decided to keep him in office this week.

Atkins, a fellow Democrat, earlier said the legislation was a longtime and elusive goal driven by her own experience growing up in a series of rentals when “the idea that the Atkins family could own a home of our own was ... a far off fantasy.”

The advocacy group California Community Builders has said legislation approved by lawmakers this year would help narrow a racial wealth gap in California, where more than 60% of whites own their homes compared to 35% of Blacks and about 40% of Latinos.

Atkins' measure was among those lauded this month by President Joe Biden’s administration.

Newsom also signed a bill by Democratic Sen. Scott Wiener easing the way for local governments to rezone neighborhoods near mass transit for up to 10 housing units.

Wiener made his bill optional in response to opposition, but the advocacy groups California YIMBY and California Community Builders still hailed its passage.

“It shouldn’t take 5 or 10 years for cities to re-zone, and SB 10 gives cities a powerful new tool to get the job done quickly," Wiener said.

Newsom said in a signing message that “certain provisions may have unintended impacts," so he ordered housing officials to monitor its progress.

Newsom also signed a bill extending a 2019 law designed to make it easier to build more housing throughout the state. That law had been set to expire until 2025, but now will remain in effect until 2030.

Lawmakers this year did not advance two other high-profile housing bills that would have made it easier to turn abandoned shopping malls into apartment buildings.

This story has been corrected to say the bill introduced by Sen. Scott Wiener was optional all along, and not that it was amended in response to opposition.