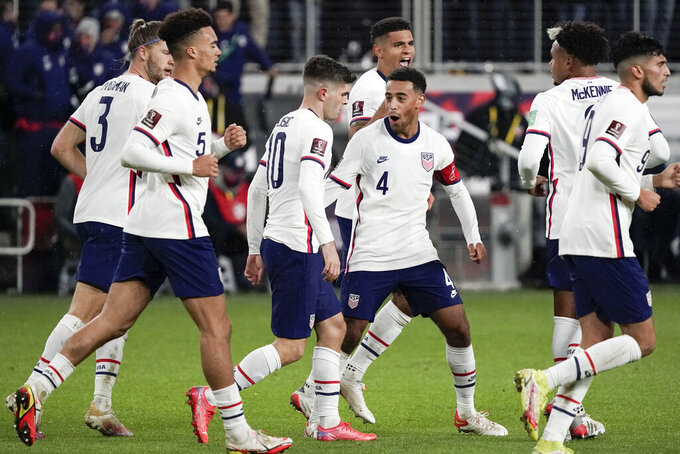 CHICAGO (AP) — The United States figures to be playing its next three World Cup qualifiers in frigid weather.

The Americans said Wednesday they will return to Lower.com Field in Columbus, Ohio, for their World Cup qualifier against El Salvador on Jan. 27 and will host Honduras on Feb. 2 in the first qualifier at Allianz Field in St. Paul, Minnesota.

Canada is expected to locate its Jan. 30 qualifier against the U.S. at Tim Hortons Field in Hamilton, Ontario, a decision that caused the U.S. Soccer Federation to opt for cold-weather venues for all three matches in the January window.

Honduras will be traveling to Minnesota from a home game three days earlier against El Salvador.

When Canada beat Mexico on Nov. 16 at Commonwealth Stadium in Edmonton, Alberta, the temperature at kickoff was 16 (minus-9).

Canada had considered BC Place in Vancouver, British Columbia, for the match against the U.S.

The U.S. has sought to place home games in areas with pro-American supporters, especially after a 2-0 loss to Costa Rica in 2017 drew a a split crowd to Red Bull Arena in Harrison, New Jersey.

Lower.com Field, a $314 million venue that opened in July, hosted the U.S. for a 2-1 win over Costa Rica on Oct. 13 that drew 20,165. Sergiño Dest scored an equalizer and the U.S. went ahead when Tim Weah’s shot was deflected for an own goal.

The USSF will use a weighted random draw for tickets.

The U.S. is second in the North and Central American and Caribbean region with 15 points, one behind Canada and one ahead of Mexico and Panama, with six games remaining. Costa Rica has nine, Jamaica seven, El Salvador six and Honduras three.

The top three nations qualify for next year's tournament in Qatar, and the No. 4 team advances to a one-game playoff for a berth.

The U.S. opened qualifying with a 0-0 draw at El Salvador on Sept. 2, was tied 1-1 by Canada three days later at Nashville, Tennessee, and rallied for a 4-1 win at Honduras on Sept. 8.

Other home qualifiers this cycle have been in Austin, Texas, and Cincinnati.

Before the next qualifiers, the U.S. will play an exhibition against Bosnia on Dec. 18 at Carson, California. Players mostly from Major League Soccer will be used for that match, which is not on a FIFA date requiring clubs to release players.

The U.S. closes qualifying at Mexico on March 24, is home against Panama three days later and at Costa Rica on March 30.