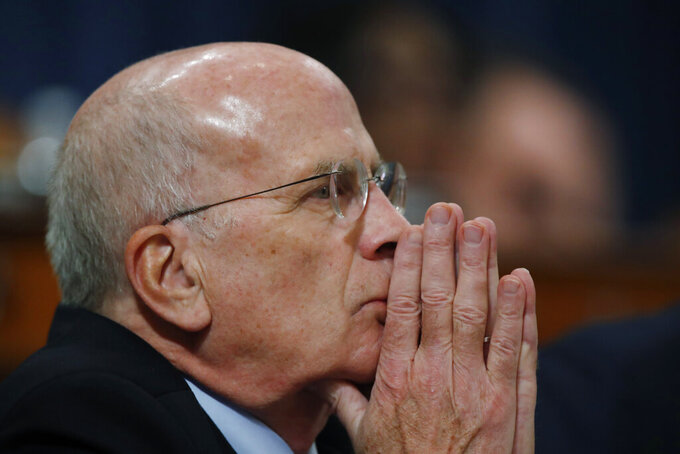 Welch's decision comes a week after the 81-year-old Leahy's announcement that he will not seek reelection to the seat he first won in 1974.

Democrats are clinging to a slim majority in the Senate, and the 2022 election could change that.

“It's just a critical moment in our democracy and in our country," the 74-year-old Welch told The Associated Press on Monday. “Are we going to continue to make progress facing climate change? Are we going to fight for reproductive rights and racial justice? Are we going to help working families?"

If elected to the Senate, Welch would be giving up the seniority he has earned during his years in the House, where he said he has proved he can work across the aisle.

“The way you get things done in Washington is by building coalitions,” he said. “What I've demonstrated in the state Senate and in Congress is to continue to reach out and work with anybody who wants to help solve problems that are affecting all of us. It is the way forward."

Welch promised to continue to fight to ensure working families have access to child care and paid family leave. He said he also would work to pass a Green New Deal to protect the environment, lower the cost of health care and prescription drug costs, ensure that women have control over their own health care decisions and protect voting rights and American democracy.

Welch was in the Capitol during the insurrection on Jan. 6, when a violent mob loyal to President Donald Trump stormed the building in a failed bid to overturn Trump's 2020 presidential election loss to Joe Biden.

“After that happened and the House was cleared, 147 of my colleagues voted to overturn the election,” Welch said. “That’s never happened in our history where violence was used and there was an effort to stop the peaceful transfer of power.”

Shortly after Welch announced his candidacy, Vermont's independent U.S. Sen. Bernie Sanders endorsed him, saying he “has the knowledge and experience to hit the ground running as a strong advocate for Vermont’s working families.”

The decisions by Leahy and now Welch will create the first open seats in Vermont's three-member congressional delegation since 2006, when Sanders moved to the Senate and Welch took his seat in the House.

Welch, who during his years in the House has been consistently one of Vermont's top vote-getters, would have an instant advantage over other potential candidates.

Vermont's popular Republican governor, Phil Scott, has said he is not interested in running for the Senate. It's unclear whom the state GOP will find to run for either the Senate seat or the House seat, but the party chair said many Vermont residents want a fresh face in Washington.

“Peter Welch is a relic of the past, and now is the time for Vermonters to choose a candidate with an eye on the future, and Vermont Republicans will provide voters with options for a future that works — not one that continues us down the path of Welch’s 'Imperiled Democracy,'” Vermont GOP Chair Paul Dame said in a written statement on Monday.

Vermont has never sent a woman or a member of a racial minority community to Washington. Several female politicians have been floated as possible candidates for the vacant seats, but the only person who has said publicly that she was considering making a bid for the House is Democratic state Sen. Kesha Ram Hinsdale, who is part Indian.

If Welch is elected to the Senate, he'd be 75 when he joins. He wouldn't comment directly on whether that would set him up to be a one-term senator.

“I have to get elected to a term before I talk about any future term," he said.

During his years in the House, he has worked for energy efficiency, cutting the prices of prescription drugs, investing in infrastructure and expanding broadband into rural areas of Vermont and the country.

As of this year, Welch served as a chief deputy whip of the House Democratic Caucus and a member of the Democratic Steering and Policy Committee.

Welch was born in Springfield, Massachusetts. He moved to Vermont in the early 1970s after graduating from law school. He served as a public defender and founded his own law firm.