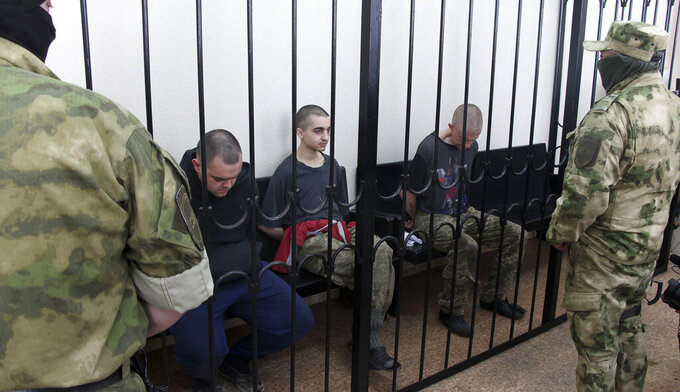 Uncredited, ASSOCIATED PRESS
FILE - Two British citizens Aiden Aslin, left, and Shaun Pinner, right, and Moroccan Saaudun Brahim, center, sit behind bars in a courtroom in Donetsk, in the territory which is under the Government of the Donetsk People's Republic control, eastern Ukraine, Thursday, June 9, 2022. Less than two weeks remain for two Britons and a Moroccan to appeal the death sentences imposed by separatist forces that captured them during fighting in eastern Ukraine. (AP Photo, File)

MOSCOW (AP) — Less than two weeks remain for two Britons and a Moroccan to appeal the death sentences imposed by separatist forces that captured them during fighting in eastern Ukraine.

With no obvious progress, or even signs of official contacts, the likelihood is growing that the men will be shot by firing squad, a conspicuous move even in a corner of Europe that has resisted the wave of abolishing capital punishment.

The sentences handed down by the Donetsk People’s Republic brought wide condemnation from abroad but were supported by Russian officials; if they are carried out, possibly in early July, it likely would increase animosity between the sides in the Ukraine conflict.

Here's a look at the case and its potential consequences:

WHO ARE THE CONDEMNED MEN?

A court in the DPR on June 9 sentenced Britons Aiden Aslin and Shaun Pinner, and Moroccan Brahim Saadoun, to death by firing squad after convicting them of terrorism and trying to overturn constitutional order. They were allotted one month to appeal the sentences.

ARE THEIR EXECUTIONS LIKELY?

Denis Pushilin, president of the separatist government, appears firmly determined to see through the sentence.

“I certainly have the right to pardon. But as of now I see none of the prerequisites to exercise this right,” he told reporters at Russia's St. Petersburg International Economic Forum. “Those people who came for money to kill the civilian population — women children, the elderly — must bear the appropriate punishment.”

A lawyer for Aslin said the Briton is pessimistic about his prospects, and that British authorities have not contacted the DPR about an appeal.

The UK, like all other countries except Russia, does not recognize the DPR as a sovereign state. Russia has said it would consider an appeal of the sentences; it is not clear if Britain has contacted Moscow about the case. Saadoun's family has called on Russian President Vladimir Putin for help, but it's unclear if there have been formal contacts.

WHAT ARE THE IMPLICATIONS?

Russia's willingness to consider an appeal underlines its influence in the separatist governments in Donetsk and in the neighboring Luhansk region, although they are viewed as sovereign by Moscow.

Applying the death sentence only to foreigners emphasizes the frequent contention of the Kremlin and the separatists that Ukraine is in thrall to Western countries and other outside forces that they claim are determined to weaken both Russia as a country and the greater concept of a nation that encompasses all Russian speakers.

In turn, death sentences imposed by an unrecognized state harden Western views of Russia and its clients as vengeful and contemptuous of international rule of law.

IS THIS AN ESCALATION?

Russia and Belarus are the only European countries to retain the death penalty. Russia has not carried out an execution since 1996, and later declared a moratorium on applying capital punishment. Ukraine itself abolished the death penalty in 2000, three years after conducting its last execution. Latvia retained the death penalty for wartime crimes until 2012.

Belarus recently made its stance more severe by adding “attempted terrorism” as a capital crime — meaning it could be applied to exiled opposition leaders such as Sviatlana Tsikhanouskaya.

It is unknown how the DPR intends to conduct the executions — whether in front of a few witnesses, open to general public view or in secret. Belarus' procedure is notoriously callous — no execution date is announced and the prisoner is informed of his imminent death only about two minutes before being shot in the back of the head, according to reports.