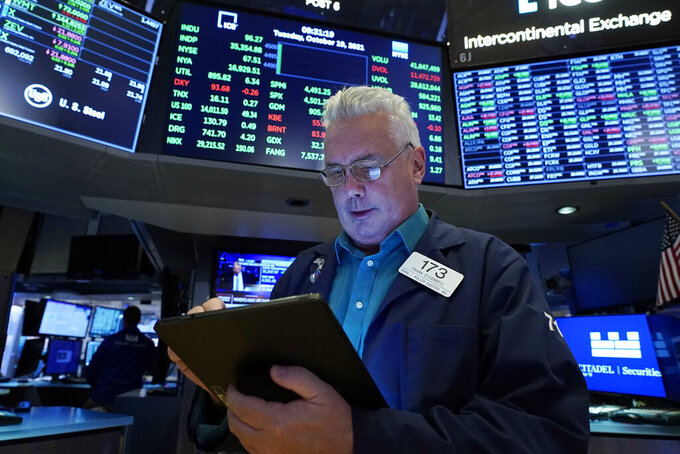 Richard Drew, ASSOCIATED PRESS
FILE - Trader Frank O'Connell works on the floor of the New York Stock Exchange, Tuesday, Oct. 19, 2021. Something strange is happening in the bond market, which is usually seen by many investors as the most steady and sober corner of Wall Street. The gap between yields of longer-term and shorter-term Treasurys is shrinking. It sounds wonky, but such action has historically been a warning of possibly tougher times ahead. (AP Photo/Richard Drew, File)

NEW YORK (AP) — Things look great across most financial markets, with everything from stocks to Bitcoin near record highs. That’s not the case in the market often seen as the most steady and sober of them all: government bonds.

In the bond market, yield can be thought of as what an investor demands to be paid for loaning Uncle Sam money. Normally, the longer it takes to get paid back, the more an investor wants to be paid.

But now, the gap between yields of longer-term and shorter-term Treasurys is shrinking. It sounds wonky, but such action has historically been a warning signal that the bond market sees potentially tougher economic times ahead. When such movements get extreme enough, they've been a somewhat reliable predictor of recessions in the past.

The bond market is not close to that extreme level, to be sure. Market watchers are also split on whether the reasons behind the movements are merely technical and thus easy to dismiss or indicative of something more troubling.

Still, they're sharp enough that they're worth watching, particularly when other markets seem to be exhibiting such calm. One measure of worry in the U.S. stock market recently touched its lowest level since it was first hit by the pandemic in February 2020.

“It's not all noise, there is some signal in here,” said Brian Jacobsen, senior investment strategist at Allspring Global Investments, of the bond market moves.

One of the strangest things happening in the bond market is that a Treasury maturing in 30 years is now paying a lower yield than one maturing in 20 years. Usually, investors want to be paid more to make up for the additional risk that a surge in inflation could erode its value, among other things.

This anomaly, called an “inversion,” is in a corner of the bond market that's not as closely followed as others. It also may just be a result of some technical trading.

In other areas of the market where an inversion has historically been a predictor of recession, there is no such anomaly. But the breathing room is shrinking as yields converge in what's called a “flattening.”

When investors sell bonds, the price falls and the yield rises. When investors are feeling more pessimistic about the economy’s long-run prospects, they tend to buy long-term Treasurys, which pushes down their yields.

Shorter-term yields have been rising on expectations that the Federal Reserve may hike its key overnight rate next year for the first time since 2018. The two-year Treasury yield, for example, has more than doubled to 0.50%, as of Wednesday morning, from 0.21% in late September.

With inflation high and the job market gaining steam, investors are pricing in a better than 50% probability that the Fed raises rates at least twice in 2022 from their current record low.

A report on Wednesday showed year-over-year inflation at the consumer level soared last month to its highest level since 1990.

Longer-term yields, meanwhile, move more on expectations for future economic growth and inflation than on imminent moves by the Fed. They have been erratic in recent weeks, but the gap between them and two-year Treasurys has been narrowing.

The 10-year yield, for example, was yielding about 0.99 percentage points more than the two-year Treasury on Wednesday morning. That's a narrower gap than the 1.46 percentage point spread of roughly six months ago.

A big reason is that yields for longer-term Treasurys have been dropping after adjusting for inflation. That can be seen in yields for Treasury Inflation Protected Securities, whose payments rise and fall with the Consumer Price Index but are currently offering negative yields.

The 10-year yield on such inflation-protected Treasurys closed on Tuesday at negative 1.195%, a record low, according to Tradeweb. That could be an indication that bond investors are lowering their expectations for the economy's future growth and how high interest rates will end up far in the future, as the U.S. population ages.

At the same time, though, technical factors such as movements in international bond markets could also be muddying the picture, analysts say.